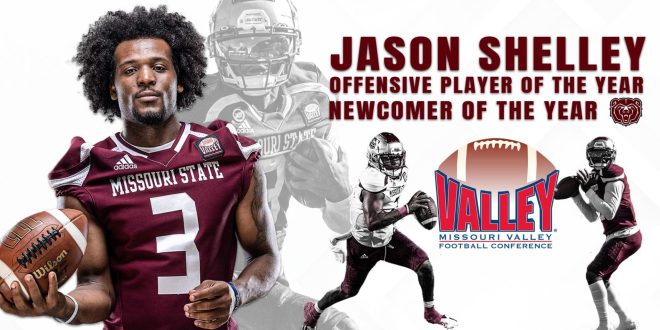 ST. LOUIS – Missouri State quarterback Jason Shelley (Frisco, Texas) was announced Wednesday (Nov. 24) as the Missouri Valley Football Conference Offensive Player of the Year as well as the league’s Newcomer of the Year.

A transfer from Utah State, Shelley has guided the Bears to their second straight NCAA FCS Playoff berth, an 8-3 regular season, and a second-place finish in the rugged Missouri Valley Football Conference (6-2). MoState is also unbeaten at home this fall (5-0) with a national ranking of 10 in this week’s AFCA FCS Top 25 poll.

Shelley, who will have one more season of eligibility next season for the Bears, is the 21st MVFC player to throw for 3,000 yards in a season, but the first Bear to do so. He currently ranks 19th on the league’s single-season passing chart, which includes such names as Sean Payton and Carson Wentz. He is currently 14th on the Valley’s single-season total offense rankings.

He joins Keith Williams (RB, 1985) and DeAndre Smith (QB, 1989 and 1990) as the only other Missouri State players to earn MVFC Offensive Player of the Year honors. Likewise, he is just the third MSU player to claim Valley Newcomer of the Year distinction, joining the ranks of former Bears Jason Cannon (WR, 1995) and Antoine Wilkinson (LB, 2009).

Shelley was announced earlier this week as one of 25 finalists for the Walter Payton Award, presented annually to the top offensive player in the NCAA FCS ranks.

He and the Bears are preparing for Saturday’s home showdown against UT Martin in the NCAA FCS Playoffs at Robert W. Plaster Stadium (3 p.m.). Playoff tickets are available 24/7 at MissouriStateBears.com or starting at 10 a.m. on Saturday at the stadium box office. Fans are encouraged to purchase their playoff tickets in advance.