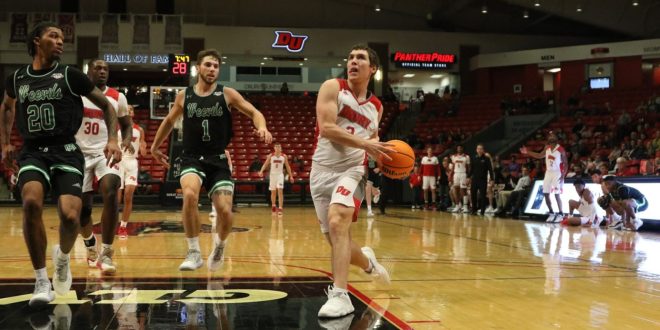 SPRINGFIELD, Mo. – The Drury Panthers refused to let one slip away on Wednesday night, as they held off the Arkansas-Monticello Boll Weevils and prevailed 70-64 in the final game of the DoubleTree Thanksgiving Classic at the O’Reilly Family Event Center.

After looking to put the game away midway through the second half, when they jumped in front of the Boll Weevils by 19 points, the Panthers saw the visitors storm back with a 27-6 run down the stretch and take the lead at 64-62 with 1:42 remaining.

Drury responded, however, scoring the final eight points of the game on second shot opportunities and clutch free throws to seal the win and improve to 2-3 on the season.

“I say it a lot, but it’s not always what you expect,” said Drury head coach Chris Foster.  “But sometimes you gotta find a way. When we needed to make some big plays, get a rebound, draw a foul late, we did that, and making some of those winning plays late builds confidence in our group.”

A back-and-forth opening half saw the lead change hands a half dozen times, with four ties, then a late 12-2 run by the Panthers gave them a 43-34 margin at the midgame break as they hit 63 percent from the field, making 17 of 27 shots during the first twenty minutes of action.

“We played well in stretches.  I was happy the guys on the bench stayed engaged and we kept a positive attitude,” added Foster.  “But we’ll look at this one and try and figure out how to not let a nineteen-point lead slip away.”

The Boll Weevils (4-2) got a 17-point effort from Josh Williams to pace their scoring.

The Panthers remain home at the O’Reilly Family Event Center for their next outing when they host Evangel University at 3 pm on Saturday.