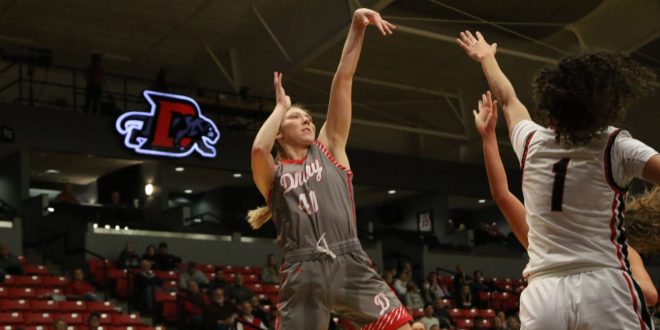 SPRINGFIELD, Mo. — The third-ranked Drury Lady Panthers relied on a tried-and-true formula Wednesday evening – early in-your-face defense – and it propelled them to a 73-56 win over 16th ranked Union on the final night of the Oasis Hotel and Convention Center Thanksgiving Classic at the O’Reilly Family Event Center.

The Lady Panthers played denial defense from the start, forcing multiple early turnovers and shutting down the Lady Bulldogs offense.

Union committed 28 turnovers for the game, but it was eighteen first-half turnovers that spelled the difference. The Lady Panthers forged a twenty-point advantage early in the second quarter before heading into halftime, up by thirteen at 41-28 over the Lady Bulldogs.

“Tonight, they were really locked in,” said Drury head coach Amy Eagan.  “They knew their personnel, they knew game prep and knew what they were going to do, and we were able to take them out of it.”

Senior Paige Robinson, once again, paced the Drury scoring with a game-high 20 points, but it was the balanced effort from junior Alana Findley that was the difference-maker.

Findley scored 9 of Drury’s first eleven points, finishing with a double-double on 15 points and 11 rebounds, plus four assists and four steals that helped the Lady Panthers improve to 8-1 on the season.

“Alana’s big time, and we knew that,” added Eagan.  “She has such a high motor. She does so many things for us both offensively and defensively, and when she’s on, she’s tough to guard.”

Graduate player Payton Richards chipped in 14 points off the bench for the Lady Panthers, while Bailey Augustine led the way for the Lady Bulldogs (3-2) with 18 points, sixteen in the second half.

The Lady Panthers are back in action, Monday, Nov. 29 when they open Great Lakes Valley Conference play for the 2021-22 season on the road in a 5:30 pm game at Missouri S & T.