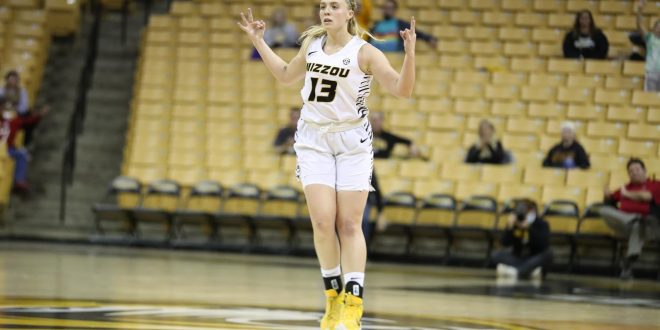 Mizzou’s free throw shooting helped them pull away within the final minutes. The Trojans cut the lead to just one with under five minutes to go in the game. The Tigers sank 11 of 14 free throw attempts within the final 90 seconds to put the game away. Hayley Frank finished 11-12 from the charity stripe on the evening.

Redshirt senior guard Haley Troup and junior forward Hayley Frank both led the Tigers in scoring with 20 points apiece. Troup tacked on five boards, three assists, and a steal. Frank in grabbed eight rebounds and added an assist. Junior guard Aijha Blackwell was dominant on the boards with 18 rebounds, the second most in her career. She earned her fourth double-double of the season with 19 points.

With a four-point lead, Mama Dembele was fouled hard by Troy’s Tiyah Johnson. After it was determined to be an intentional foul, the Tigers were awarded two free throws and the ball. Hayley Frank sunk both free throws and on the ensuing possession, Haley Troup got to the line and she added two more. The eight-point lead was too much for the Trojans rally from late in the game.

Aijha Blackwell earned her fourth double-double of the season, with 19 points and 18 rebounds on the night. She filled up all columns of the stat sheet including a pair of blocks, a steal and assist.

Haley Troup’s 20 points marked a new career high in addition to five boards, three assists, and a steal. She went 3-for-6 from beyond-the-arc.

Hayley Frank finished off the night with 20 points, as well as eight rebounds and an assist. Her 11 free throws is a new career high.

In the second all-time matchup between the schools, and the first since the 1997 Coca-Cola Classic in Mobile, Alabama, Mizzou extended their series lead to 2-0.

Mizzou improves to 5-0 start for the first time since 2015-16. That squad started the season 13-0, and undefeated through non-conference play.

Alijah Blackwell earned her 24th career double-double, and fourth of the season. She is

Hayley Frank and Haley Troup both scored 20 points, marking the second time this season in which two Mizzou players reached 20.

Mizzou faces Columbia in the opening round of the Christmas City Basketball Tournament in Bethlehem, Pa. on Saturday, Nov. 27. Tipoff is set for 2:30 p.m. CT. There will not be a broadcast for the game.