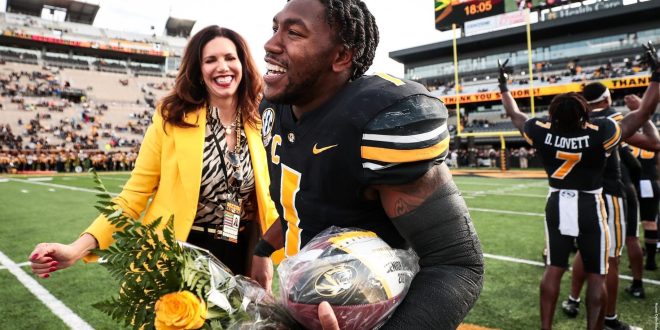 COLUMBIA, Mo. – Announced by the PwC SMU Athletic Forum on Monday, in conjunction with ESPN, University of Missouri senior Tyler Badie is one of the finalists for the Doak Walker Award.

A native of New Orleans, La., Badie is the only player in the country with four, 200-yard games this season and one of just three SEC players to complete the feat since 2000 (Leonard Fournette and Derrick Henry). Badie ranks fourth nationally in rushing yards (1,385), yards per game (125.9), sixth in total touchdowns (17) and 13th in total points (102).

Badie is joined by Breece Hall (Iowa State) and Kenneth Walker III (Michigan State) as 2021’s three finalists. The Committee will cast a second ballot to determine the recipient of the 2021 Doak Walker Award. The recipient will be announced live during The Home Depot College Football Awards which will be televised on ESPN on Thursday, December 9, at 6 p.m. CT / 7 p.m. ET.