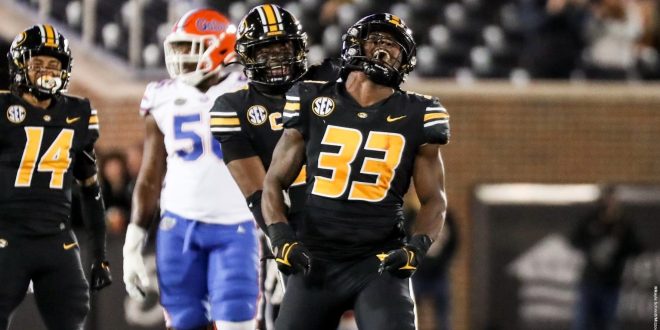 Tigers Take Momentum on the Road for Battle Line Rivalry

COLUMBIA, Mo. – Missouri football (6-5, 3-4 SEC) travels to No. 21 Arkansas (7-4, 3-4 SEC) for the Battle Line Rivalry, presented by Shelter Insurance, on Friday, Nov. 26. Kickoff is set for 3 p.m. in Fayetteville with the game airing on CBS as Noah Eagle, Aaron Murray and Rick Neuheisel call the action.

Tiger fans can also tune in on the Tiger Radio Network where Mike Kelly, Howard Richards and Chris Gervino have the call.

Mizzou football (6-5, 3-4 SEC) will have more hardware on the line as it travels to SEC West cross-divisional rival Arkansas (7-4, 3-4 SEC) and Donald W. Reynolds Razorback Stadium for the Battle Line Rivalry, presented by Shelter Insurance®. The winner will receive the massive Battle Line Trophy, which is made of silver and stands more than four feet tall and weighs more than 180 pounds. The trophy depicts the outline of the two states with the border of the two states being divided by interchangeable silver inserts with the words Battle Line in either gold or cardinal. The color of the Battle Line within the trophy will be reflective of the winner of the series’ most recent game. It has been gold for the last five years, as Mizzou has won the last five meetings.

Harrison Mevis made a 32-yard field goal as time expired to help Mizzou football complete a 50-48 Tiger win over SEC West permanent cross-division rival Arkansas at Memorial Stadium. Mizzou trailed by 14 in the fourth quarter but outscored the Razorbacks 24-8 over the final 13:15 to run its winning streak against the Razorbacks to five. After Arkansas converted a two-point conversion to take a 48-47 lead with 0:43 left, Mizzou drove 60 yards to set up Mevis’ 32-yarder. Larry Rountree III rushed for 185 yards and three touchdowns for his 13th career 100-yard game and eighth career game with multiple scores. Tyler Badie had two touchdown runs and Connor Bazelak threw for 380 yards, including a perfect 4-of-4 for 54 yards on the final drive.

A Tyler Badie touchdown run and a Connor Bazelak-to-Daniel Parker two-point conversion pass in the first overtime period gave the Missouri Tigers a 24-23 victory over the Florida Gators and made them bowl eligible for the second consecutive season. Florida scored first in overtime on a wide receiver reverse pass by Trent Whittemore to quarterback Emory Jones for a six-yard score. Missouri wasted no time to enter the end zone. Badie ran to the left for 12 yards and then to the left again for a 13-yard touchdown. Head coach Eliah Drinkwitz chose to go for the win right there – and after Bazelak executed a series of fakes in the backfield and falling backwards under pressure, he lofted a pass to the wide-open Parker for the winning points.

Bryce Young passed for more yards than any Alabama quarterback ever had in a game. The Crimson Tide needed that kind of performance — and every timely deep ball to Jameson Williams, too. Young passed for a school-record 559 yards and five touchdowns as Alabama clinched a spot in the Southeastern Conference Championship Game with a 42-35 victory over Arkansas. This one wasn’t settled until Arkansas’s onside kick went out of bounds with 1:02 left. The Razorbacks had stayed alive with Raheim Sanders’ 17-yard touchdown catch from K.J. Jefferson, but took nearly five minutes to get there. Jefferson passed for 326 yards and three scores, going 22-for-30. Treylon Burks led the Hogs’ receivers with eight catches for 179 yards and two touchdowns.

BADIE IS A BAD MAN

• Tyler Badie racked up 146 yards on the ground against Florida, putting him third on the Mizzou all-time single-season rushing list with 1,385 yards. He scored on a 13-yard run in overtime to set up Mizzou’s victory. 127 of his yards came in the second half and overtime.

• Badie’s yardage was also enough to place him 10th on the Mizzou all-time career rushing yards list with 2,521 yards. He needs 12 more yards to reach Corby Jones in ninth and 31 yards to reach Tony Temple in eighth.

• Badie has rushed for over 200 yards on four different occasions this season (209 vs. South Carolina, 254 vs. Vanderbilt, 209 vs. North Texas, 203 vs. CMU). He is the only player in the country with four, 200-yard games this season and one of just three SEC players to complete the feat since 2000 (Leonard Fournette & Derrick Henry).

• His 254-yard rushing performance at Vanderbilt marked the most by a Mizzou back in the SEC era (2012-pres.) and the fifth most in program history. He is the only Mizzou player to ever produce four, 200-yard rushing games in his career – let alone a single season.

• For a second-consecutive season to start the Drinkwitz era, Mizzou is bowl eligible after defeating Florida in overtime.

• Mizzou has earned bowl eligibility against a strong schedule, having faced eight teams which are already bowl eligible this season. The eight bowl eligible opponents are tied for sixth-most in the nation.

• A bowl-berth in 2021 would mark the fourth in the past five seasons for Mizzou and the program’s 34th bowl bid.

• Mizzou has won back-to-back games on the strength of stellar defensive performances.

• The Tigers held both South Carolina (57) and Florida (93) below 100-yards rushing. Going back to Mizzou’s trip to No. 1 Georgia, the Tigers have held three straight opponents to less than 125 yards rushing.

• Mizzou scored 21 points off of three South Carolina turnovers in the Tigers’ 31-28 win over the Gamecocks.

• The Tigers produced a defensive score for the second time this season when Martez Manuel sacked Jason Brown and forced a fumble which was recovered in the end zone by Trajan Jeffcoat. It was Mizzou’s first fumble recovery for TD since 2018, also against the Gamecocks.

• Mizzou held SC to just 250 yards of total offense, the lowest total for the Gamecocks in series history.

• Against Florida, Mizzou limited the Gators to just six first-half points and surrendered just one touchdown in regulation.

• The Tigers recorded 11 tackles for loss against the Gators, including two sacks, while adding another seven quarterback pressures.

JEFFCOAT SEC D-LINEMAN OF THE WEEK

• The SEC Defensive Lineman of the Week for games played on Nov. 20, redshirt junior Trajan Jeffcoat had a career day getting into the backfield against Florida, racking up 3.5 tackles for loss.

• One of the TFL was a sack of QB Emory Jones while Jeffcoat added another hurry as well.

• Jeffcoat has recorded a TFL in each of the last six games for the Tigers and has piled up a career-best 10 TFL this season.

• Sophomore kicker Harrison Mevis – the SEC Special Teams Player of the Week for games played on Oct. 30 and Nov. 20 – was responsible for Mizzou’s first nine points scored in the game, hitting field goals of 39, 46 and 31 yards in the first two quarters. He went for 3-for-4 in field goals in the game.