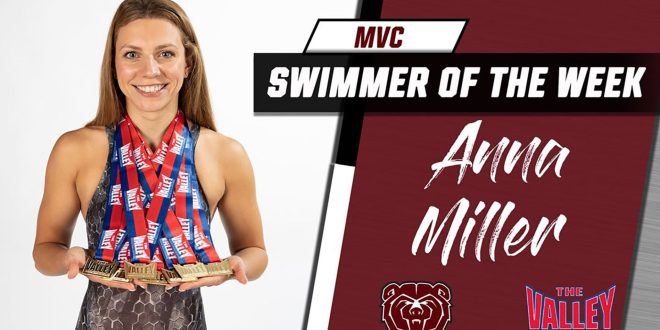 Miller broke her school and MVC record by registering a time of 22.13 to win the 50 freestyle at the Purdue Invitational on Nov. 18. The time was the sixth-fastest among all collegiate swimmers this year, breaking her previous record by over one-tenth of a second. Miller also recorded a second-place finish in the 100 freestyle by clocking a time of 48.70, which was the second-fastest time in school history. In addition to her individual performances, she helped the 400 freestyle relay team record a fifth-place finish.

She is the reigning MVC Swimmer of the Year after winning all three of her events in record-breaking fashion at last season’s championships. The St. Louis, Mo., product has 20 career MVC golds and holds school records in the 50 and 100-meter freestyles, in addition to the 100-yard butterfly.

The Bears will be back in action on Dec. 4 when they host Missouri at Hammons Student Center. Start time is set for Noon.