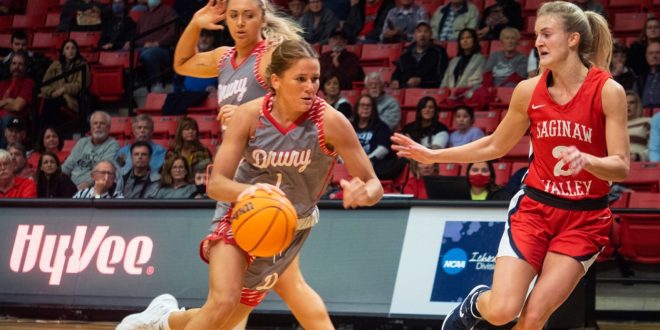 SPRINGFIELD, Mo.– The third-ranked Drury Lady Panthers kicked off the opening night of the Oasis Hotel and Convention Center Thanksgiving Classic with an 81-76 win over the Saginaw Valley Cardinals at the O’Reilly Family Event Center on Tuesday.

While they controlled the tempo of the contest most of the evening, it was an explosive start to the final quarter that carried Drury to their seventh win of the season, as they poured in the first 11 points of the period to lead by 18, then held off the visitors down the stretch to improve to 7-1 overall.

“I was a little disappointed that we got a couple of good leads and then let them make runs at us,” said Drury head coach Amy Eagan.  “But I think we did a great job when we needed to down the stretch to get the win.”

After grabbing a 20-15 advantage after the opening quarter, the Lady Panthers moved in front by 17 points midway through the second period as they outscored the Cardinals 18 to 6 and held a 45-32 edge at intermission.

The Cardinals pulled to within seven points at the end of three quarters however, as Kaitlyn Zarycki scored 18 of her teams 22 points in the period, to make it 61-54, before the Lady Panthers used their fourth-quarter surge to build a margin that Saginaw Valley was unable to recover from.

Turnovers in the game were a big key, as the Lady Panthers forced the Cardinals into 19 miscues while committing just six.

“We did a great job of taking care of the ball tonight,” added Eagan.  “That’s one of the differences we like to see, is forcing people into turnovers, and we know that can lead us to good game results.”

Zarycki finished the evening with a game-high 36 as the Cardinals dropped to 4-2 on the season.

The Lady Panthers are back in action, Wednesday, when they face Union University of Tennessee at 5:30 pm to conclude play in the Oasis Hotel and Convention Center Thanksgiving Classic at the O’Reilly Family Event Center.