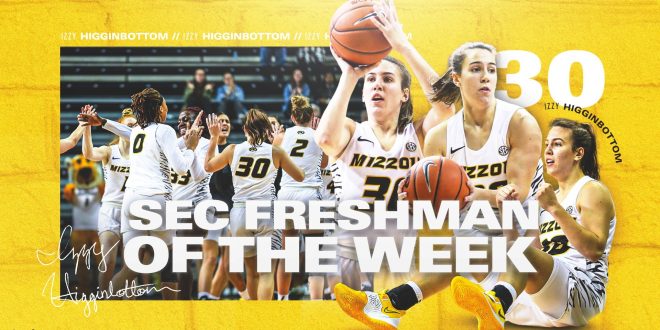 Higginbottom is coming off a big week for the Tigers. The freshman from Batesville, Arkansas led the Tigers in scoring in each game with 17 and 18 points, respectively, against Saint Louis and Idaho State. She set a new career high in each contest.

So far this season, Higginbottom is shooting 64.7 percent (11-17) from beyond-the-arc. Her 11 three-pointers through four games are the most by a Mizzou player since the 2014-15 season and the most by a freshman since 2011-12 (Morgan Eye). She leads the SEC in three-point shooting among qualifying players.

Through four games, Higginbottom is averaging 12.3 points, 1.5 rebounds, and 0.8 assists per game while shooting 57.1 percent from the floor and 64.7 percent from three.

Catch Izzy Higginbottom and the rest of the Tigers in action tonight at Mizzou Arena against the Troy Trojans. Tipoff is scheduled for 7 p.m. CT on SEC Network. Sam Gore and Tamika Catchings will be on the call.