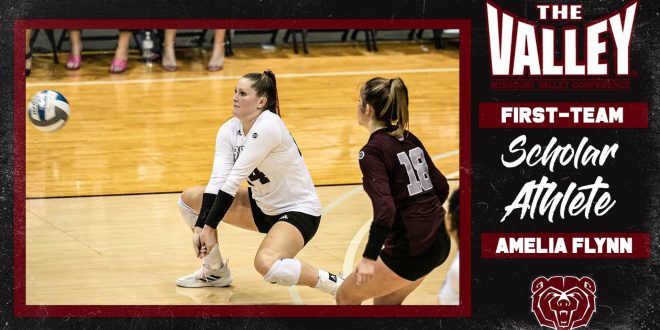 St. LOUIS, Mo. – Missouri State’s Amelia Flynn received recognition from the Missouri Valley Conference Tuesday for her efforts on the court and in the classroom with a repeat selection to the MVC Scholar-Athlete First Team according to a vote of the league’s volleyball sports information directors.

Flynn started every match and appeared in every set this season for the Bears, leading the team with 3.55 kills per set and 329 total digs. The Lake St. Louis, Mo., native averaged 2.99 digs and 3.91 points per set, pacing the Bears in kills 15 times with 14 double-doubles.

The senior outside hitter is on track to graduate in May with a clinical lab sciences degree and carries a 3.55 cumulative grade point average. She eclipsed 20 kills three times in 2021 with a high of 22, and ranks fifth in the league in kills, sixth in points and 12th in digs.

A total of 43 student-athletes were nominated for the MVC’s scholar-athlete team. The criterion for the honor parallels the CoSIDA (College Sports Information Directors of America) standards for Academic All-America voting. Nominees must be starters or important reserves with at least a 3.30 cumulative GPA (on a 4.00 scale). Also, students must have participated in at least 75-percent of the regular-season matches. Student-athletes must have reached sophomore status in both athletic and academic standing at their institution (true freshmen and redshirt freshmen were not eligible).