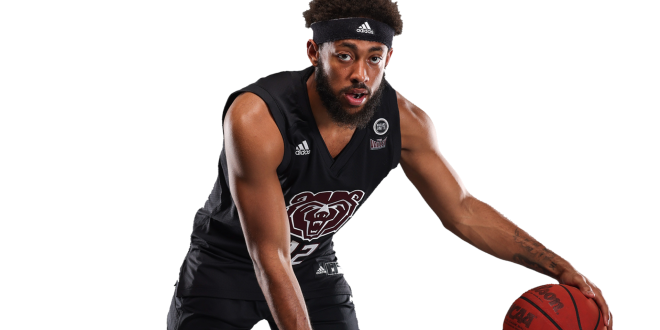 NAPLES, Fla. – A 15-foot jumper by East Tennessee’s David Sloan with 2.5 seconds remaining lifted the Buccaneers (3-2) past Missouri State, 77-76, here Tuesday in the semifinals of the inaugural Naples Invitational.

The Bears (3-2) had taken the lead moments earlier when Demarcus Sharp drove left and beat the shot clock with a leaning layup to give Missouri State a 76-75 advantage. With a foul to give, the Bears elected to use it with 8.9 seconds to play, which resulted in an ETSU timeout to set up the winning play.

The game was a thriller throughout with all the makings of a championship bout. There were 22 lead changes on the night with the two teams combining for 26 3-point baskets.

Missouri State got 18 points from Isiaih Mosley, 17 from Gaige Prim and 17 from Jaylen Minnett while shooting 56 percent from the field on 28-of-50 field goal attempts. Minnett was 5-for-5 from 3-point range on the evening.

After trailing by one at the half, Missouri State came out of the locker room firing with a triple from Donovan Clay, who finished with 10 points, and a jumper by Prim to give MoState a 48-45 advantage. But over the next four minutes, the Buccaneers drained three 3-pointers, all coming on the heels of clutch Bears buckets.

Unable to gain separation either way, the lead see-sawed back and forth nine times in the game’s final 10 minutes with Minnett draining two go-ahead 3-pointers, and Mosley splashing home another. With 4:39 left in the game, Mosley’s fourth trey of the game put the Bears ahead 72-68 and seemed to finally give the Bears the extra push they needed.

But moments later, ETSU got the break of the night when 6-foot-9 reserve Charlie Weber hit his only three of the game to make it a one-point contest. On the play, Mosley was whistled for his fourth personal foul while the shot was in the air, keeping possession with the Buccaneers. ETSU capitalized moments later with a jumper from Ledarrius Brewer that completed the five-point swing and give the Buccaneers a 73-72 lead.

The Bears regained the lead on a turn-around jumper from Prim with 2:06 to play, but Sloan’s floater with 62 seconds to go gave it back to East Tennessee.

In the final minute, the Bears got their last dose of magic on the night when Mosley fed a cutting Sharp for the go-ahead layup at the 28-second mark in advance of Sloan’s last-second shot for ETSU that pushed the SoCon squad into Wednesday’s championship game against Kent State.

The Bears, who were out-rebounded for the second night in a row, 27-21, will play George Washington in Wednesday’s third-place game at 4:30 p.m. (Central). The game is available on-demand at FloHoops.com.

Other matchups Wednesday in Naples will feature Wright State vs. Long Beach State for seventh place and Murray State vs. James Madison for fifth place.

In the first half, three ties and 10 lead changes saw the Bears and Bucs exchange haymakers to the tune of 16 3-pointers. ETSU hit the last triple of the half, a 40-footer from Brewer at the buzzer, to take a 45-43 lead at the intermission in an eerie foreshadowing of the game’s deciding moments.

The Bears weathered a 13-0 ETSU run midway through the opening half with Jordan King knocking down three straight treys in the span of just over a minute to ignite the Buccaneers rally. But Minnett quenched the hot-shooting from the Johnson City side with a triple of his own to end the run and draw MSU within 26-21.

Minnett finished the first half with a team-high 11 points behind three 3-pointers, while Keaton Hervey’s baseline dunk just three minutes before halftime put MoState ahead 39-35 at the time.

After Wednesday’s final game in the Naples Invitational, the Bears will open league play at Illinois State on Dec. 1 before finally returning to JQH Arena on Saturday, Dec. 4 when they take on BYU in a nationally-televised game at 3 p.m.

Tickets for the BYU game are available at MissouriStateBears.com or by visiting the Old Missouri Bank Box Office at JQH Arena, (417) 836-7678, during regular box office hours.