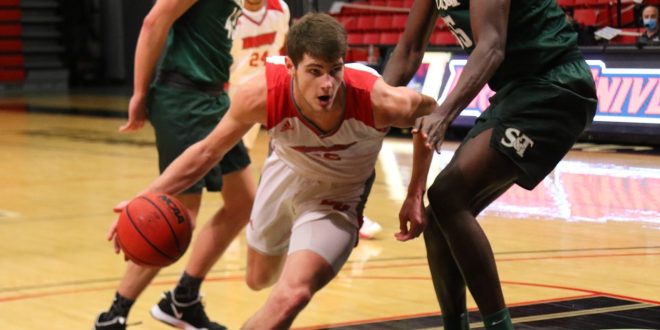 The Panthers are 1-2 after starting the season with a 1-1 mark in the Ferris State Classic in Big Rapids, Michigan. Last Friday, Drury fell at Southern Nazarene 80-71 as Obi Okafor led the Panthers with 18 points and eight rebounds.

Head coach Chris Foster is in his first season leading the Drury program and will be on his home bench for the first time this week. Foster took over from Steve Hesser, who retired after 17 seasons leading the Panthers and 41 years as a head coach. Foster spent the previous three seasons as head coach at McKendree and was the head coach at Truman State for four years prior to his stint with the Bearcats.

About the Savage Storm
Southeastern Oklahoma State is 2-1 after opening the year with a loss, 79-78, to Minnesota-Moorhead, then winning 80-64 over Wayne State (Neb.), and Arlington Baptist, 128-70.

Jett Sternberger is averaging 31.7 points for the Savage Storm and scored 55 points against Arlington Baptist on Wednesday.

Southeastern Oklahoma State went 8-11 last season and two years ago were 23-8, reaching the 2020 NCAA-II Tournament. The program’s previous nickname was the Savages and featured former NBA star Dennis Rodman from 1982-86.

Ray Price averages 17.5 points for the Weevils, while Richard Feagin, Jr. is putting up 16 points per game.

UAM won the Great American Conference last year, going 16-5 overall and 12-4 in the regular season. The Boll Weevils received the GAC’s automatic bid to the NCAA-II Tournament after winning the GAC tourney and lost to sixth-ranked Oklahoma Baptist in the opening round.