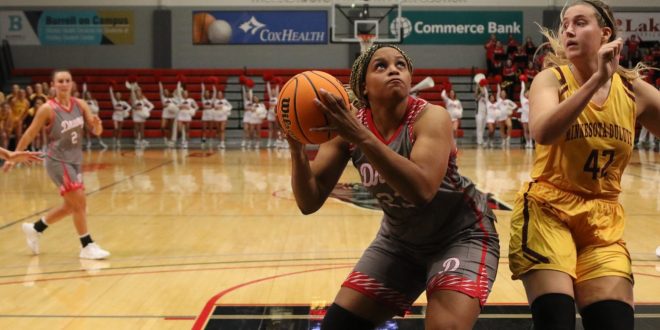 On Tuesday, the Lady Panthers will see a Saginaw Valley State team they last saw in the second round of the NCAA-II Tournament in 2018 and advanced with a 67-55 win in Ashland, Ohio.

Drury will play their fourth nationally-ranked opponent on Wednesday when they take on Union (Tenn.). The Lady Panthers are 3-0 all-time against the Bulldogs with an 87-79 win in their last encounter on Nov. 25, 2017 at the O’.

About the Cardinals
Saginaw Valley State is 4-1, but they are coming off of a loss at home on Saturday to fellow Great Lakes Valley Conference member Southern Indiana, 65-64.

Jaelencia Williams averages 16.7 and 12 rebounds per game to lead Union. Ashtyn Baker puts up 15 points per game for Union.

The Bulldogs have reached the NCAA-II Tournament six of the last seven years and went to the 2018 Elite Eight. Prior to joining the NCAA, Union won five NAIA-I National Championships between 1998 and 2010.

Up Next
The Great Lakes Valley Conference schedule begins for the Lady Panthers with their next game. Drury will travel to Missouri S&T on Monday, Nov. 29, for a 5:30 pm game in Rolla.