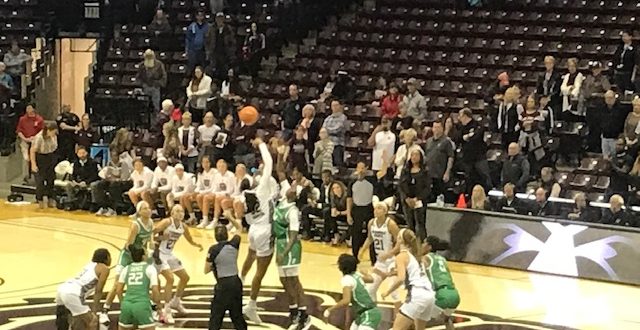 The Missouri State Lady Bears survive a scare from the University of North Texas to win 56-50 Sunday afternoon in women’s college basketball at JQH Arena.

The contest featured five ties and eight lead changes, with the Mean Green taking a 30-28 lead into the locker room at the half after MSU’s Paige Rocca hit a jumper in the lane at the buzzer to cut MSU’s deficit from four to two.

The Lady Bears took a 31-30 lead two minutes into the third quarter on a free throw by Jasmine Franklin, but the lead changed hands four more times in just over a minute before Missouri State’s Mya Bhinhar hit a three pointer at the 6:56 mark to give MSU a 35-34 advantage.

Missouri State built its lead to ten points at 44-34 when Franklin hit a pair of free throws with 2:55 remaining in the third period, but the home team couldn’t pull away, as North Texas cut the margin to five, 46-41 going into the final ten minutes.

The Lady Bears went cold from the floor for much of the fourth quarter, but continued to hold on to a tenuous lead.

When Aly Gamez hit a layup for North Texas with 5:09 left in regulation, the Mean Green pulled within three, 50-47.

But the Lady Bears got a big stop on defense as Franklin got the rebound off a missed shot and got the ball to senior Brice Calip, who took it to the net, hit the layup and got fouled with 2:41 remaining

That gave MSU a 52-47 lead, and North Texas couldn’t pull any closer.

Bhinhar hit two of Missouri State’s three treys on the afternoon, with North Texas going 1-11 from beyond the arc.

The Lady Bears forced 24 turnovers and had 14 steals.

Neither team shot well from the floor, with North Texas hitting 32% of its shots, and the Lady Bears hitting only 31%.

The Lady Bears improve to 2-0 on the season, while the Mean Green drop to 2-1.

Missouri State will play at Oklahoma State Wednesday at 6:30 p.m.