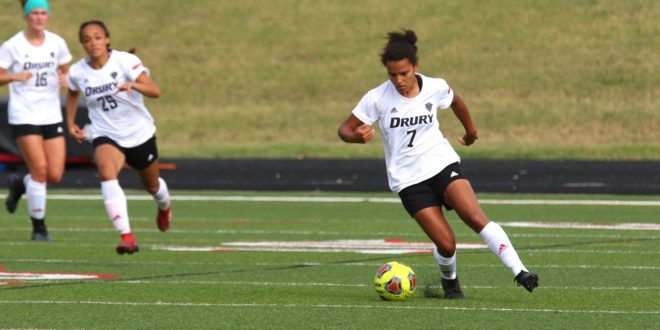 Gonzalez becomes Drury’s first-ever Offensive Player of the Year award winner as the sophomore from Spain notched nine goals, with three assists this season. Eight of her goals and 18 of her points came during conference play, and she scored two game-winning goals during the season. Gonzalez was the GLVC Offensive Player of the Week on Oct. 11, and she was the only unanimous selection for First Team All-GLVC honors. Last year, Gonzalez was named a Third Team All-GLVC member as a Freshman.

Tara Simon is the 2021 GLVC Freshman of the Year and is the first Drury player to win the honor since Jessie Sanderson in 2007. The freshman from Brighton, Michigan, has three goals and had one assist for seven points this season. Each of her three goals came in conference games, and all three were game-winners, including a second-half strike in Drury’s final regular season game, a 1-0 win over Illinois Springfield.

In his second season as Drury’s head coach, Justin Olson was named the league’s GLVC Coach of the Year. He guided the Panthers to a 12-4-1 record and a 10-3-1 mark in the league after the program went 3-13-2 two years and went winless the season before in 2018. Their second-place finish in the conference standings in 2021 is Drury’s best finish ever in the league, and they’ve earned their first GLVC Tournament bid since 2015. During the season, the Panthers were nationally ranked for the first time since 2009 when they appeared at number 24 in the NCAA-II coaches’ poll on Oct. 19. Olson is the first Drury women’s soccer coach to earn the league’s Coach of the Year award.

In addition to the three major award winners, the Panthers had five players named to the all-conference team. Gonzalez was named to the All-GLVC First Team, while Keeley Combs, Andrea Camargo, and Kaitlin Knetzke were Second Team selections, and Chloe Cash was named a Third Team All-GLVC performer.

Combs, a junior from Ozark, has one goal with five assists so far this season. Her five assists have her tied for third in the league.

Andrea Camargo earned Second Team honors in her second collegiate season. The sophomore from Covina, California, earned an all-conference selection as a defender after playing in all 17 games and scoring two goals with two assists.

Drury goalkeeper Kaitlin Knetzke was also named a GLVC Second Team performer. Knetzke, a junior from Ozark and Springfield Catholic HS, led the conference with a 0.37 goals-against average and was fourth in save percentage with a mark of .846. She recorded 10 shutouts and has not allowed more than one goal in any of her 17 games so far this season.

Chloe Cash was named Third Team All-GLVC. The senior from Nixa has three goals, four assists, and 10 points this season. Her four assists are tied for the seventh-most in the conference.

Drury ended the regular season 12-4-1 and 10-3-1 in the conference. Drury’s 12 wins is the most for the program since 2009 when the Panthers went 13-6. The Panthers play in the quarterfinals of the GLVC Tournament on Sunday at noon against Lewis at Harrison Stadium in Springfield. The semifinals of the tournament are on Nov. 12, with the championship game on Nov. 14.