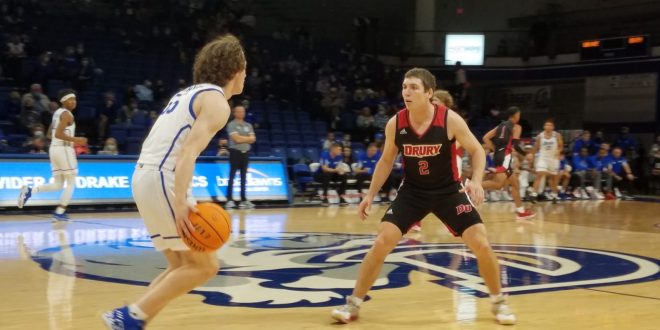 DES MOINES, Iowa. – Drake, the preseason favorite in the Missouri Valley Conference, looked like a team poised to return to the NCAA Tournament as they defeated Drury 96-49 in an exhibition game in the Knapp Center in Des Moines, Iowa, on Thursday night.

Leading 13-9 early five minutes into the game, the Bulldogs went on a 10-2 run to build a double-digit lead. Drake then pulled away for a 51-24 lead at halftime and put the game out of reach when they outscored the Panthers 17-2 to start the second half.

“When you’re playing against guys with that kind of size, and athleticism your weaknesses are going to be glaring,” said Drury head coach Chris Foster. “There are things offensively that we’ve got to get better at, but I thought we played well defensively in some stretches. There will be a lot of learning moments when we break down and watch the film.”

The Panthers were dealt a blow midway through the first half when Clay Gayman, a 6-7 junior forward and transfer from Division I Abilene Christian, was injured after drawing an offensive foul. Gayman left the game with a head injury and did not return.

Victor Nwagbarachoa led Drury with nine points. The Panthers shot 30 percent from the field, hitting 19 of their 63 attempts and connected on just two of 19 tries from three-point range.

Drake’s Okay Djamgouz led all scorers with 16 points, while Tremell Murphy and Tucker DeVries both had 13. The Bulldogs shot 55 percent, hitting 36 of 65 shots, and they made 13 of their 31 three’s.

The regular season begins on Nov. 13 for Drury when they face Ohio Dominican in the first game of the Ferris State Tipoff Classic. Tipoff is at 4 pm (Central) in Big Rapids, MIchigan.