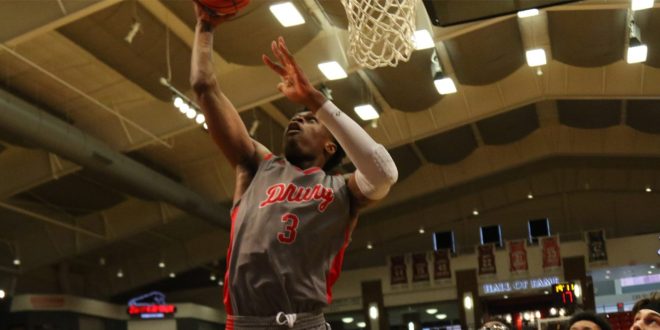 The game will mark the start of the Chris Foster era at Drury as he begins his tenure as the Panthers head coach. Foster took over the helm on March 24 after Steve Hesser retired from the post after 17 years guiding the program. Foster was previously the head coach at fellow Great Lakes Valley Conference member McKendree for the three seasons, and was the head coach at Truman State from 2014-2018. He is the 20th head men’s basketball coach in Drury’s 112-year history of the program and just the fourth since 1980.

Drury’s game on Thursday against Drake is their first exhibition game against an NCAA Division I opponent since they played at Duke on Nov. 2, 2013. The Panthers led that game at the half at Cameron Indoor Stadium, 38-34, but lost to the Blue Devils 81-65. Current Drury assistant Ben Fisher played in that game for the Panthers.

Thursday’s game is Drury’s only exhibition game. The Panthers start the regular season on Nov. 13 in the Ferris State Tipoff Classic against Ohio Dominican. Drury takes on the host school, Ferris State, the following day on Nov. 14.

About the Bulldogs
Drury will face a Drake Bulldogs team that is picked to win the Missouri Valley Conference in the league’s preseason poll. Drake has all five starters back from a team that went 26-5 last year, posted a 15-3 record in the conference, and advanced to the second round of the NCAA Tournament. The Bulldogs defeated Wichita State, 53-52, in the opening round of the NCAA’s last year, then lost 72-56 to Southern California in round two.

Drake’s squad will feature Roman Penn, a Preseason First Team All-MVC, and ShanQuan Hemphill, selected to the Preseason Second Team. Penn averaged 11.2 points and 5.5 assists last season, while Hemphill put in 13.2 points per contest and pulled down 5.9 rebounds per game.