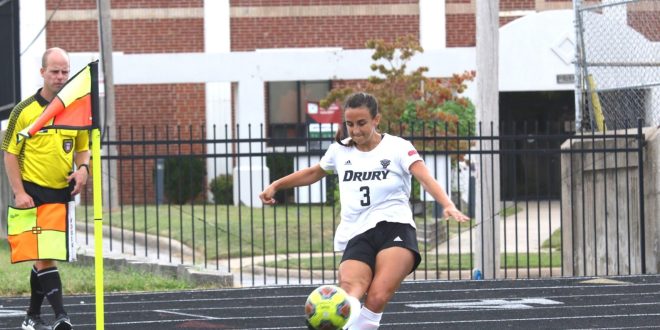 SPRINGFIELD, Mo.— The Drury women’s soccer team will open play in the Great Lakes Valley Conference Tournament on Sunday when they take on Lewis at noon in Harrison Stadium. The game will mark the program’s first postseason appearance since 2015.

Not only are the Panthers in the league playoffs for the first time in six years, but they are on the bracket as the number two seed, their highest finish in the GLVC standings in program history. Drury went 12-4-1, 10-3-1 in the conference play, and cracked the NCAA-II top 25 for the first time since 2009 when they appeared at number 24 on Oct. 19.

The Panthers will host a Lewis team that is seeded seventh. The Flyers went 9-5-2 and 7-5-2 in the GLVC. Lewis edged Drury 1-0 in the regular season on Oct. 22 in Romeoville, Illinois.

Sunday’s quarterfinal winner will advance to the league semifinals to play the winner of number three seed Truman State and sixth-seeded Missouri S&T on Nov. 12.  The semifinals and conference championship will be played at the site of the highest remaining seed after the quarterfinal round.

The other quarterfinal games include top-seeded McKendree hosting number eight Missouri-St. Louis, and fifth-seeded Southern Indiana at number five Indianapolis. Each of the quarterfinal games are Sunday, with the semifinals scheduled for Nov. 12 and the GLVC championship game is set for Nov. 14.