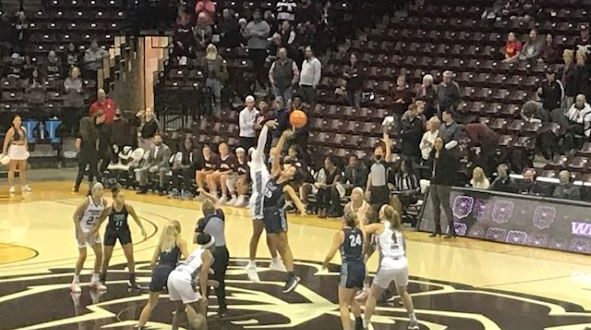 The Missouri State Lady Bears have taken the court for the first time since last season’s magial Sweet 16 run in the NCAA Tournament, beating Missouri Baptist 107-33 Monday night in an exhibition game at JQH Arena.

Everyone on Coach Amaka Agugua-Hamilton’s eligible roster saw playing time in the contest, with Abby Hipp, Brice Calip, Sydney Wilson, Mya Bhinhar, and Jasmine Franklin starting and rotating in and out of the game.

M-S-U jumped out to a 14-0 lead over the Spartans and led 27-5 after one quarter, then went into the locker room at the half up 54-13 before opening up a 79-22 advantage after three quarters.

Wilson led seven Lady Bears in double figure scoring with 19 points on 8-10 shooting, followed by Hipp and Franklin with 14 points each, Abigayle Jackson and Paige Rocca with 12 points each, and Calip and Mariah White with ten points apiece.

The Lady Bears will play Lincoln University a final exhibition game Friday night at 6:00 p.m. at The Q.

Missouri State opens the regular season Tuesday, November 9th at the University of Arkansas at Little Rock in a 7:30 p.m. tipoff.