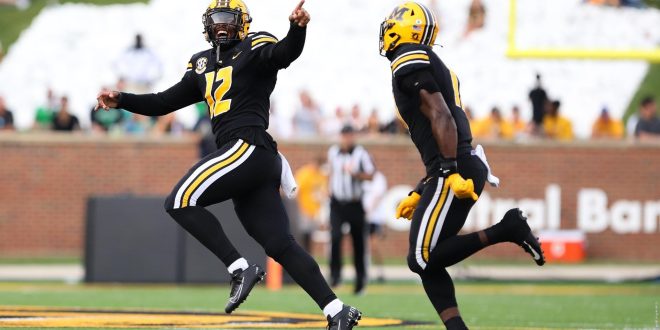 Mike Kelly, Howard Richards and Chris Gervino will have the call on the Tiger Radio Network.

Saturday marks the 16th overall meeting between Mizzou and Texas A&M and the fourth as members of the Southeastern Conference. The Aggies lead the series, 8-7, with the Tigers winning two of the last three. Mizzou won the last meeting between the two teams in CoMo (2013).

Russell Hansbrough ran for a career-high 199 yards and two touchdowns to help Missouri to a 34-27 win over Texas A&M on Nov. 15, 2014, in College Station. Missouri scored 28 points in the third quarter to erase a seven-point halftime deficit and take a 34-20 lead.

Hansbrough ran for touchdowns of 49 and 45 yards in his fifth career 100-yard game in front of a crowd of more than 100,000 which included former President George H.W. Bush and his wife Barbara.

The Aggies got within a touchdown early in the fourth quarter and had a chance to tie it with less than three minutes remaining, but lost a yard on fourth down from the Missouri 1. The Tigers then ran out the clock to secure their fourth straight win and remain in first place in the SEC East.

Andrew Baggett’s 49-yard field-goal attempt bounced off the right upright, giving the Aggies the ball back with 5 1/2 minutes remaining, but they came away empty after the fourth-down stop. Missouri’s Shane Ray had a sack to give him 13 this season, extending his school record. Maty Mauk threw for 252 yards with a touchdown and an interception.

Running back Tyler Badie scored three first-half touchdowns and the Missouri Tigers (3-3) delighted a Homecoming crowd of 46,985 with a 48-35 victory over the North Texas Mean Green (1-4). It was Mizzou’s fifth-straight Homecoming victory and ran its all-time record in Homecoming games to 65-40-5.

After Kris Abrams-Draine intercepted a pass at the North Texas 26-yard line on the visitor’s first possession of the game, Badie got the Tigers on the board with a 12-yard touchdown run around the left side. The Missouri defense forced a three-and-out and Badie sparked another TD drive with a 50-yard run to the NT 23. Seven plays later he caught a three-yard scoring pass from Connor Bazelak.

Missouri’s other first-half points came on a 41-yard pass from Bazelak to JJ Hester, and a 48-yard field goal by Harrison Mevis, who also booted a 40-yarder in the fourth quarter and now has made 16 FGs in a row. The Tigers led 31-7 at halftime.

MU got its first defensive score of the season in the fourth quarter when Trajan Jeffcoat deflected an Austin Aune pass that was intercepted by freshman tackle Mekhi Wingo who took it back 40 yards for a touchdown.

With 2:08 left in the game, an injured Zach Calzada led the Aggie offense 54 yards down the field to set up a Seth Small 28-yard field goal to dethrone the top ranked Alabama Crimson Tide, 41-38. The win marks the third time that the Aggies have beaten an AP No. 1 opponent as Jimbo Fisher became the first former assistant to defeat Nick Saban.

On the game’s opening drive, the Aggies marched down the field but ultimately stalled, setting up a Seth Small 38-yard boot. Alabama answered with a 10-play, 65-yard touchdown drive to give the Crimson Tide a 7-3 advantage. On the following drive, Texas A&M quickly fired back beginning with Calzada finding Demond Demas for 14 yards. Jalen Wydermyer closed out the drive with a 34-yard reception before the eventual 27-yard TD catch to take a 10-7 lead.

With 5:00 left in the fourth quarter, Calzada was nearly perfect, completing four of his five passes and connecting on a beautiful, perfectly-placed 25-yard touchdown pass to Smith in the back right corner of the end zone to tie it up at 38.

The Maroon & White defense forced a key three-and-out to set the Aggies’ historic 8-play, 54-yard game-winning drive to etch their names in the record books.

• Mizzou is 20-for-21 scoring inside the red zone, with the only “blemish” coming when the Tigers took a knee to run out the clock against North Texas.

• The Tigers have scored touchdowns on 81.2 percent of their trips to the red zone.

ONE & ONLY: TYLER BADIE

• With his 17-yard reception against Tennessee, senior running back Tyler Badie became the first Mizzou Tiger in program history to reach 1,000 rushing yards and 1,000 receiving yards in his career. He became the first SEC player to reach the mark since Kentucky wide receiver Lynn Bowden, Jr., did so in 2019.

• Another first, Badie is the lone Tiger to score a combination of 15 rushing scores and 10 receiving TDs.

• With a career-high 209 rushing yards against North Texas, Badie became just the third Tiger to ever produce multiple 200-yard rushing performances in a single season.

• The senior is averaging 147.3 all-purpose yards this season, good for ninth nationally and first in the SEC.

• Badie’s 12 total touchdowns on the season rank second in the country and tops in the SEC. All 12 of Badie’s touchdowns have come from scrimmage, tying the back for the national lead.

• Badie leads the SEC with eight rushing touchdowns on the season. He has a touchdown in each of the first six games this season. He is the first Tiger since Jeremy Maclin in 2007 to record four rushing and receiving touchdowns in a season.

• Mizzou produced its first defensive score of the season against North Texas, as Trajan Jeffcoat deflected a pass which was intercepted by freshman defensive lineman Mekhi Wingo and returned 40 yards for a touchdown.

• The interception was the first of Wingo’s career and marked the first time a Mizzou defensive lineman has scored since Akial Byers in 2018.

• The INT return for TD was part of a three-turnover performance for the Tigers’ defense. Kris Abrams-Draine picked off a pass to setup Mizzou’s first score of the day and later recovered a fumble forced by corner Akayleb Evans.

• Evans forced two fumbles on the day, the first two FF of his career.