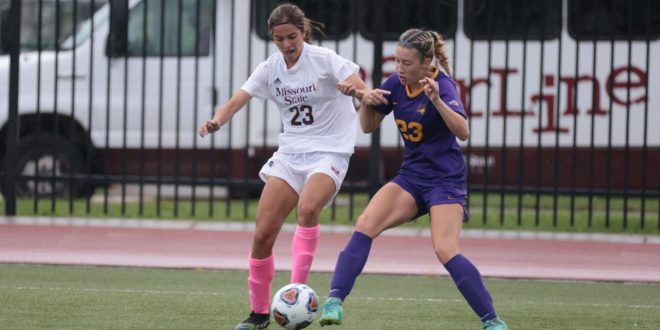 The Panthers got on the scoreboard in the 48th minute off a set piece as Sandra Thiman settled a pass from Siri Ott and then tapped in a left-footed shot past MSU keeper Katherine Montgomery.

Northern Iowa got insurance in the 62nd minute courtesy of a goal from Ashley Harrington with, Allison Whitaker providing the assist.

“We were shorthanded, but I felt like we should have had a better outcome,” head coach Rob Brewer reflected. “We will get some players back for our next match and we will try to focus on that to get back to our winning ways.”

Rainy conditions made for an offensive struggle in the first half as neither team scored, and both teams combined for just three shots on goal and 10 shots overall.

Missouri State entered the locker room in a scoreless tie for the second-consecutive match and sixth time this season.

Missouri State had an opportunity to get on the board in the 80th minute of play when UNI fouled the Bears in the box, but Kennady Orlick’s penalty kick was deflected away by the Panthers’ Chloe Russo.

Riley Sherron and Orlick both led the offensive attack for Missouri State as each tallied three shots while putting two on goal. Kaeli Benedict also put a shot on goal in the 88th minute of play.

Montgomery recorded four saves while allowing two goals in her 90 minutes of action.

With three matches to go in the regular season, the Bears will be back in action when they travel to Terre Haute, Ind., to square off against Indiana State on Sunday. Kickoff is scheduled for noon and the match will be broadcast on ESPN+.