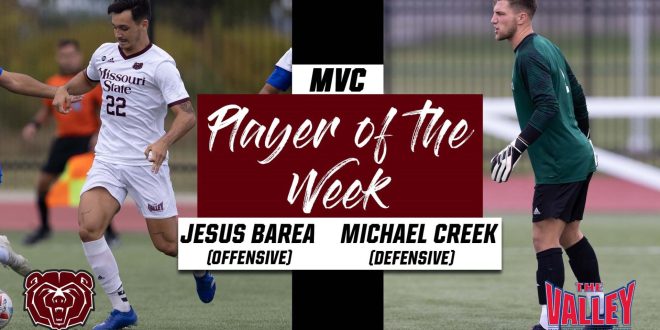 Barea earns the honor after scoring the golden goal in the Bears 2-1 double-overtime victory over the Ramblers on Saturday night to keep MSU undefeated in MVC play. With three minutes left in the match, the sophomore forward raced down the field before sending the ball through the hands of the Loyola keeper to secure the win in the 106th minute. He also recorded his eighth start against the Ramblers in the Oct. 9 match, playing 94 minutes and recording an additional shot. The goal was Barea’s first of the season and helped MSU stay atop the league standings by defeating a strong Loyola team.

Creek has been a key part of MSU’s core 11 all season and takes home the defensive accolade after playing 106 outstanding minutes in MSU’s battle for the top of the conference standings against Loyola. The senior not only started the match, but also protected the net against an offensively dangerous Ramblers team for the entirety of the doulbe overtime victory. He recorded five huge saves for the Bears, which helped keep Loyola at bay and secure the win for the Bears.

Missouri State hosts Kansas City on Tuesday, Oct. 12, to close out its non-conference schedule. The game will kick off at 6 p.m.