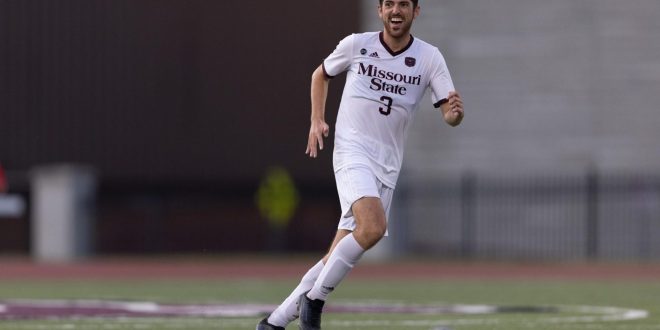 SPRINGFIELD – An explosive second half performance led the No. 10 Missouri State men’s soccer team (10-1-0, 5-0-0) to a season-high offensive output in its 5-1 victory over Kansas City here Tuesday night.

With the victory, the Bears remained unbeaten at home this season with an 8-0 record and concluded non-conference play with a bang.

“We gave up an early goal, but the team responded, made it level at halftime and really just came out and dominated in the second half,” said head coach Jon Leamy after the win.

The Roos came out strong in the first half, giving the Bears all they could handle. In the 14th minute, their efforts came to fruition as Hugo Von Reis found the back of the net to give Kansas City the early lead.

Tasked with digging themselves out of an early deficit, the Bears got to work, as Jesus Barea netted the equalizing goal off an assist from Jon Koka in the 32nd minute.

After the half, the Bears were hungry for more, scoring back-to-back goals less than 30 seconds apart to give MSU the 3-1 advantage in the 56th minute. Greg Stratton sent a header to the back of the net off an assist from Kian Yari, before Yari got his turn, sneaking a penalty kick through the hands of the Roos goalkeeper to further extend MSU’s lead.

From there, the home team remained in control, as freshman Ryan Leonard scored the first goal of his MSU career in the 61st minute. In the 66th minute, Simon Pedersen tacked on one of his own, giving the Bears the four-goal lead and win over their last non-conference opponent of the season.

“It was a great team effort,” continued Leamy. “Lots of players played and it was a total effort from the team with a fantastic result. Now we’re back into conference play.”

MSU will be back in action on Sunday night to close out a three-game home slate against SIU Edwardsville at 2 p.m. Admission is free at all home Missouri State soccer matches this season.