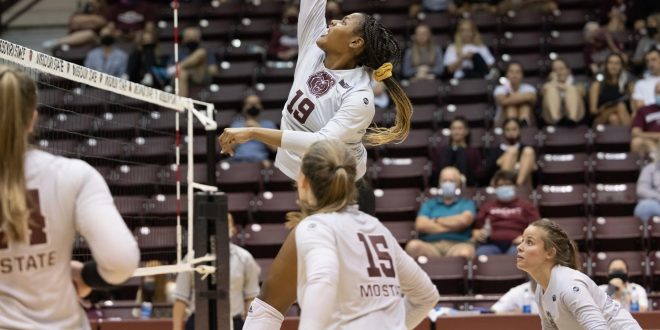 Volleyball Hits the Road for Matches at Evansville, SIU

Storylines for the Week
1) Missouri State (13-5, 4-2 Missouri Valley Conference) embarks on a four-match road trip this week, beginning Tuesday at 5 p.m. at Evansville. The Bears then take on Southern Illinois at 5 p.m. Saturday, and head to Valpo and Loyola Oct. 22-23.

3) Middle blockers Azyah Green and Maddy Bushnell have been a force at the net this season. Green’s 1.12 blocking average ties her 2020 output for the best at Missouri State since 2009, while Bushnell leads the MVC with a .365 hitting percentage that would rank third in school history should she reach the required 200 total kills to qualify for the record book. Bushnell enters the weekend with 122 kills on the season.

4) In addition to Bushnell, MSU’s two other freshmen are contributing in a big way this season. Morgan Sprague’s 11.31 assists per set rank atop the standings for Valley matches and her 10.34 average is third overall for the season, and Kate Owen ranks fifth in conference contests with 4.26 digs per set.

5) Missouri State is 13-0 this season when winning the first set, with 20 consecutive victories in that scenario.

6) The Bears are 4-0 in five-set matches this season and 10-4 under Coach McRoberts when going the distance.

7) Missouri State has posted an overall winning record, both overall and in MVC play, 21 times in the last 22 seasons.

8) The Missouri State-Southern Illinois coaching matchup features a combined 1,284 victories on the sideline, with MSU’s Steven McRoberts ranking 18th among active Division I coaches with 615 victories, and SIU’s Ed Allen ranking 12th with 669 wins. McRoberts, who succeeded Allen as head coach at Tulsa in 2011, owns an 10-1 record in head-to-head meetings – 1-0 against Tulsa as Central Arkansas’ head coach, 7-1 versus Alabama while coaching Ole Miss, and 2-0 in Missouri State/SIU match-ups.

Series Histories
The Bears are 50-5 all-time against Evansville and won both matches in Springfield last season.
Missouri State leads SIU 60-20 in the all-time series, winning 29 of the last 35 meetings.