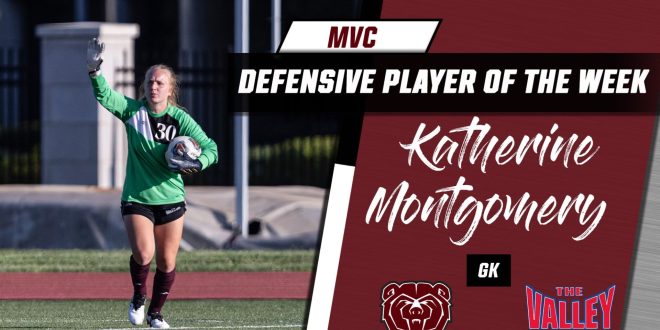 Montgomery had a career-high 11 saves in the Bears’ scoreless draw at Loyola. Her 11 saves were most by an MSU keeper in a single match since 2018. The Geneva, Ill., product picked up her fifth clean sheet of the season with the shutout which ranks third in the MVC and 47th nationally.

“Kate has been very consistent in her approach to the game and always gives 100 percent,” head coach Rob Brewer stated. “She is a strong communicator on the field and commands respect by her actions. She was the first to commend the work her teammates did to allow us a chance at a shutout on Saturday.”

She has tallied 55 saves in 1,165 minutes of action this season. Her .850 goals against average ranks second in the MVC and 77th nationally.

The Missouri State women’s soccer team continues its MVC campaign this week as it hosts UNI on Wednesday at 1 p.m. (CT). Admission is free to all home games at Allison South Stadium this season.