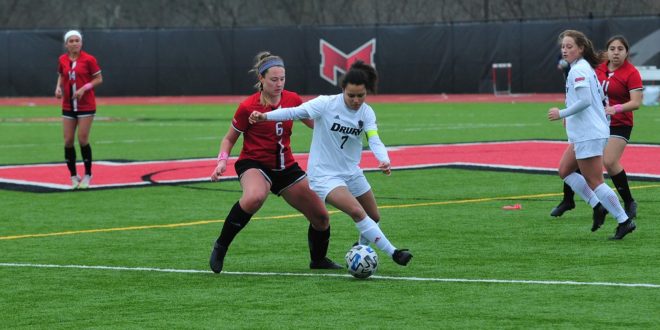 The sophomore from Spain had three goals in two games last week as the Panthers went 2-0, earning road wins at Missouri-St. Louis and Lindenwood. Gonzalez scored her fifth goal of the season in Friday’s 4-0 victory at UMSL on Friday, then scored both Drury goals in a 2-0 win at Lindenwood on Sunday.

Gonzalez, who is second in the GLVC in goals scored this season with seven, has scored a goal in three straight games and has found the net six times in Drury’s last four games.

The award is the first in Gonzalez’s career, and she is the first Drury player to be honored with the offensive award since Chloe Cash won it on March 8, 2021. Earlier this year, Kaitlin Knetzke won the GLVC Defensive Player of the Week on Sept. 8.

The Panthers 10-1, and in first place in the GLVC with an 8-0 league record. It is Drury’s best record through 11 games in program history. They return to action on Friday morning with 10 am start at home against Southern Indiana at Harrison Stadium.