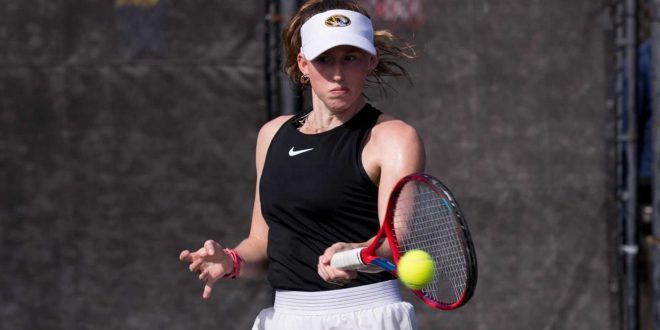 Charleston, S.C. – Bronte Murgett and Marta Oliveira completed a solid run in the ITA-All Americans Tournament this past week, despite multiple weather delays.

On Thursday, Murgett defeated No. 41 Carly Briggs (Florida) in the first round of the singles consolation tournament 6-4, 4-6, 7-6 (4). The victory came days after losing to No. 35 Fiona Crawley (North Carolina) in the qualifying singles on Monday, 6-4, 3-6, 5-7. The back draw singles tournament was canceled after the first round due to multiple weather delays on Tuesday and Wednesday.

In doubles play, Murgett and Oliveira lost to Janice Tjen and Victoria Flores (Pepperdine) in the doubles main draw round of 32, 5-8. Murgett and Oliveira then routed Carolyn Ansari and Selin Ovunc (Auburn) in the consolation tournament, 8-2, and advanced to the back draw semi-finals. The duo fell to No. 51 Taylor Bridges and Ena Babic (LSU) in the semi-finals, 4-6, 3-6.

“Once again history has been made,” said head coach Chris Wootton. “No one has ever done what Bronte and Marta did this week. Results don’t define us but making memories does.”

The Tigers will compete in their final tournament for the fall season, the ITA Regionals, next week. The ITA Regionals are held in Iowa City, Iowa, from October 21 through October 24. Draws have not yet been announced.

Visit MUTigers.com for the latest information on all things Mizzou Tennis. You can also find the Tigers on social media by liking us on Facebook (Mizzou Tennis) and following us on Twitter (@MizzouTennis) and Instagram (Mizzou_Tennis).