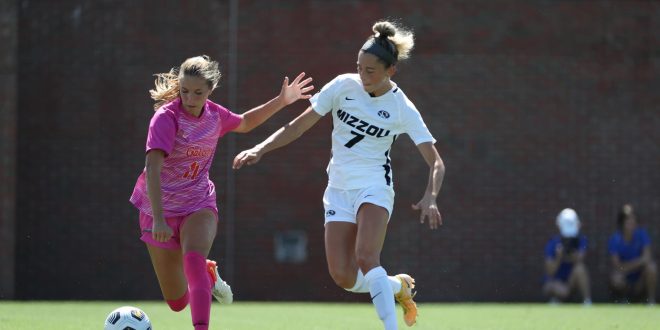 The Tigers got on the board first. Nurnberger played a cross to the right side of the box to McCormick who got it past the keeper, but it was cleared off the line to Skye Kingsley. Kinglsey’s initial shot was blocked before she played it over to Blythe Beldner who fired a one-timer just under the bar for her second goal of the season.

The Gators were able to equalize only a few minutes later off a corner reentry.

Jadyn Easley was able to steal a pass from the Gator’s keeper late in the first half and find Kyla Johnson, but a deflection by the defender hit Johnson’s hand before she put it in the net.

In the second half, McCormick was able to connect with Cisneros on three separate occasions for quality chances, but they were unable to put the Tigers ahead.

The Gators jumped ahead in the first in the second period. In the 66th minute, off a corner, Price played a ball high into the air that deflected off the woodwork and Alexander was able to find it and put it in the net.

Jadyn Easley was able to level the match only a few minutes later after receiving a cross from Kyla Johnson and just rolled it into the net after it was deflected by the keeper.

Florida put together a number of dangerous chances late in the second half, but McKenna Sheehan was able to withstand the pressure to send the match to overtime.

Right away in the first overtime period, Jadyn Easley was put the match away in the first minute. Jenna Bartels sent a through ball to Easley out wide on the right and she chipped it over the keeper for the golden goal.

Jadyn Easley’s heroics were the difference for the Tigers in the match. She added her first career brace after entering the match with one career goal.

Blythe Beldner added her second goal of the season in the first half to put the Tigers on top.

Kyla Johnson earned her first career point by assisting Easley’s first goal of the game. She nearly scored a goal in the match, but it was disallowed.

Jenna Bartels got her first assist of the season with the through ball to Easley for the golden goal.

Mizzou had never won or tied in Gainesville.

The Tigers win their third overtime match of the season.

Mizzou improves to 5-8-2 all-time against the Gators.

Missouri will travel south to No. 7 Arkansas for a Friday night match.