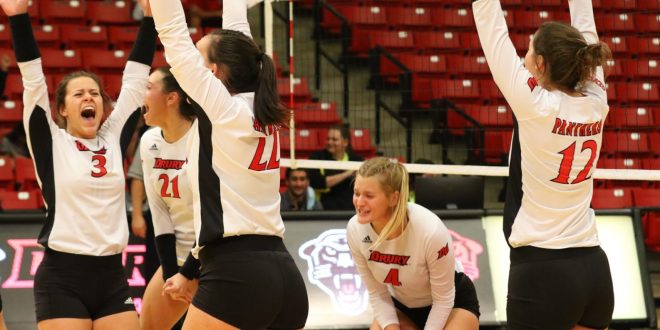 SPRINGFIELD, Mo.— Drury knocked off 13th ranked Lewis and ended the Flyers’ eight-game winning streak with a 3-2 on Friday at the O’Reilly Family Event Center.

The Panthers improved to 11-6 and 4-4 in the Great Lakes Valley Conference, while Lewis lost in league play for the first time this year and went to 13-4 and 8-1 in the GLVC.

The Flyers ran away with the first set winning 25-12, but Drury responded with a 25-18 victory in the second. Lewis took the third set 25-17 and seemingly had control in the fourth with a 16-12 lead in the set. The Panthers fought back, though, and won eight of the last 12 points for a 27-25 win that forced a fifth set.

Drury pulled away in the fifth set for a 15-9 win to clinch the match.

Taylor Forth led the Panthers with 19 kills and the senior from Gilbert, Iowa, posted a .515 hitting percentage. Gabriela Oliveria added 12 kills while contributed 44 assists, and Juliana Squire, playing at Libero for the first time this season, had 29 digs.

“We made the decision to move Juliana into the Libero position thinking we needed to have the best possible backcourt we could have against Lewis,” said Drury head coach Jenifer Bahner, who earned the win on her birthday. “I felt like our defense was going to be needed for us to win tonight. I think she did a great job back there.”

Juliana Van Loo had a game-high 21 kills for Lewis, while Lauren Stenman put up 53 assists.

“We’ve been trying to find to our rhythm and our rotation,” said Bahner. “We’ve had to try a couple of different things, and we even tried different things tonight. Our team was flexible and whoever we put out on the court gave us a great effort tonight.”

Drury is back at home on Saturday when they host Indianapolis for a 3 pm match in the O’Reilly Family Event Center.