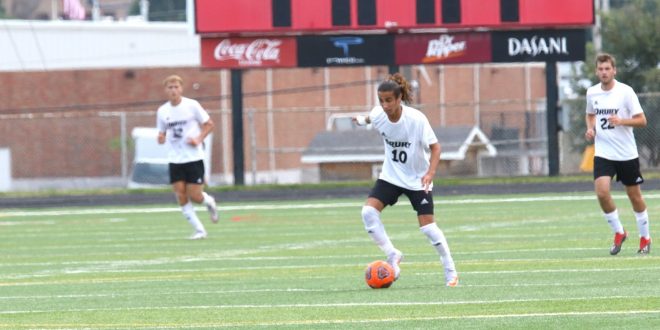 Panthers hang on for 3-2 win at Missouri-St. Louis

ST. LOUIS, Mo.– The Drury Panthers fought off a late charge by Missouri-St. Louis and hung on for a 3-2 win on the road Friday night.

The Panthers owned a 1-0 lead at halftime as they struck first on a goal by Ian Conger in the 37th minute. The goal was Conger’s second of the year.

Joshua Lewis-Evans added his second goal of the season and gave Drury a 2-0 in the 53rd minute, then Adem Hamdaoua made it 3-0 in the 65th minute with his fourth goal of the year.

Missouri-St. Louis made it close as Arman Kovac scored twice, getting a goal in the 69th minute, then another that brought the Tritons within one in the 87th minute. UMSL could not a get a shot away in the final three minutes, however, and the Panthers hung on for the win.

Drury goalkeeper Yannick Lamers saw 10 shots from Missouri-St. Louis and made two saves as he picked up the win.

The Panthers play again on Sunday when they take on Lindenwood for a 2:30 pm game in St. Charles, Missouri.