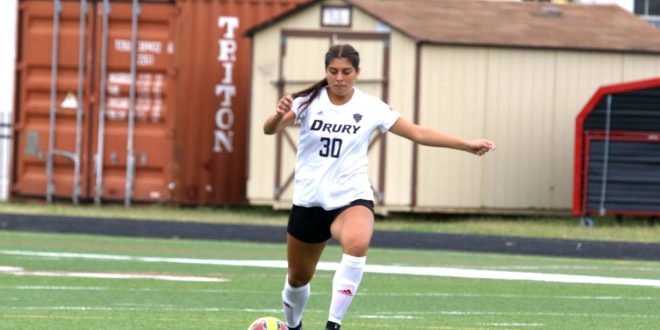 ST. LOUIS, Mo.– The Drury Panthers continued their unbeaten streak in the Great Lakes Valley Conference with a 4-0 win at Missouri-St. Louis on Friday night.

After a scoreless first half, the Panthers scored four times in the second. Andrea Camargo got Drury on the board in the 59th minute with her second goal of the season. A minute later, Elsa Gonzalez gave the Panthers a 2-0 lead with her fifth goal of the year. Keely Combs and Abby Street added to Drury’s lead as they closed out the night with a 4-0 win.

Panthers goalkeeper Kaitlin Knetzke made two saves and saw three shots as she recorded her eighth shutout of the season. The junior from Springfield-Catholic has blanked opponents for three straight games.

Combs also had an assist in the game for Drury as the Panthers extended their best start through 10 games in program history.

Drury will take on Lindenwood in St. Charles, Missouri, on Sunday at noon in the second half of their road trip.