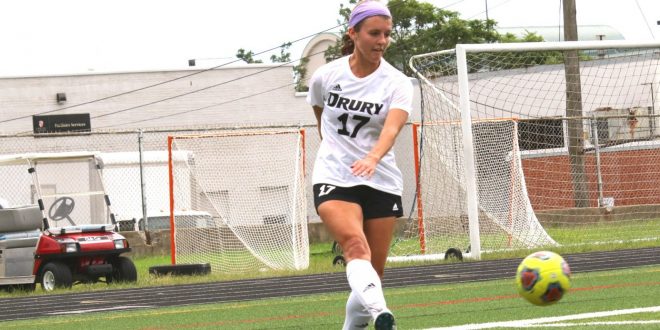 SPRINGFIELD, Mo.– The Drury Panthers struck for three second-half goals to improve to 4-0 in the Great Lakes Valley Conference with a 3-1 win over Southwest Baptist on Sunday at Harrison Stadium.

Drury went to 6-1 overall and is in the GLVC’s only unbeaten team through four games. The Bearcats dropped to 1-4-1 and 1-3 in the league.

Southwest Baptist struck first and had the game’s only goal in the opening half as Raegan Edwards fired a shot just under the crossbar to give the Bearcats a 1-0 lead in the game’s 18th minute.

SBU’s lead held until the 58th minute when Elsa Gonzalez tied the score with a goal on an assist from Chloe Cash. Gonzalez then put her team in front in the 77th minute on an unassisted goal, and Drury put the game out of reach on Chloe Cash’s second goal of the year in the 83rd minute.

Gonzalez, a sophomore from Spain, picked up the first multi-goal game of her career and has three goals on the season.

With the win, Drury matches their best start through seven games since 2007 when the Panthers opened 6-1 and ended the year 17-5-3. That team advanced to the third round of the NCAA-II tournament that season.

Drury returns to action on Friday morning when they host Maryville at 10 am in Harrison Stadium.