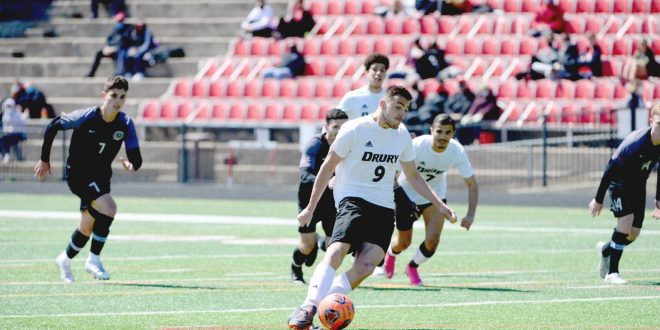 SPRINGFIELD, Mo.– The Drury Panthers extended their winning streak to four games as they put up seven goals in a 7-0 victory over Southwest Baptist on Sunday at Harrison Stadium.

Drury stayed perfect in the Great Lakes Valley Conference, improving to 4-0 and 4-3 overall. The Bearcats dropped to 0-6 and 0-4 in the GLVC.

The Panthers scored three goals in the first half, then added four in the second half, and have posted 13 goals in their last two games. Last Sunday, they picked up a 6-0 win on the road at William Jewell.

O’Brien got the Panthers on the board six minutes into the contest on an assist from Trevor Cairns. After Jack Griffith’s goal gave Drury a 2-0 advantage seven minutes later, O’Brien struck again, firing home a shot in the 30th minute.

Drury got on the board eight minutes into the second half on a goal from Logan Favreau, then O’Brien converted on a penalty in the 60th minute to complete the hat trick.

Adem Hamdaoua tacked on two more tallies to round out the Panthers scoring.

Jayd Hamdaoua registered four shots and drew the foul in the penalty area that set up O’Brien’s penalty kick.

The seven goals for Drury matches their most in a game since 2013 when they won at Southwest Baptist 7-0.

The Panthers return to action on Friday afternoon when they host 21st ranked Maryville for a 12:30 pm game at Harrison Stadium.