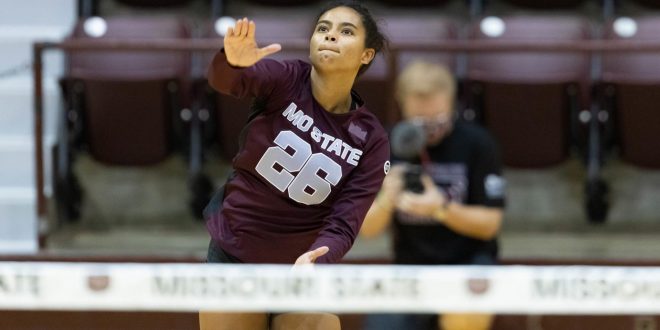 SPRINGFIELD – Missouri State had five players with at least eight kills and four with 13 or more digs Saturday in a 3-1 Missouri Valley Conference victory against Valparaiso at Hammons Student Center.

The MSU defense dug a season-high 80 balls and held the Beacons to a .153 hitting percentage, getting a career-high 19 digs from Kate Owen, 13 from Cink and 14 from Morgan Sprague, who dished out a career-best 51 assists in guiding the Bears to a .255 attack efficiency.

“That was a great bounce back win,” said MSU head coach Steven McRoberts. “I’m really proud of the way we finished the fourth set. Every player that played tonight made positive contributions.”

Missouri State pulled away from a 9-9 tie by hitting .342 with 23 digs in the opening set, as Cink led the way with five kills, six digs and an ace.

The second set was Missouri State’s lone period hitting below .200, though the Bears cut a 19-10 deficit to 24-21 before Valpo held on, and Ibarguen had seven kills without an error in the third period as Missouri State hit .333 and trailed only once at 2-1.

The Bears played catch-up in the fourth set until a 4-0 run to lead 13-11, then found themselves down 23-21 when Green hit consecutive kills for the tie. A Valpo error set up match point and Ibarguen followed with a kill to cap a match-ending 4-0 run.