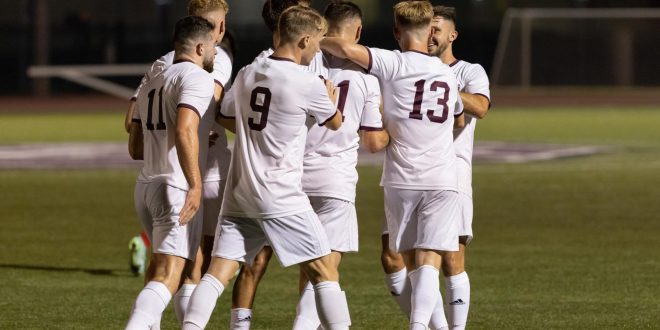 SPRINGFIELD – Two early goals were enough to give the Bears their sixth win of the season, and second in Missouri Valley Conference play, here Saturday night, as the Missouri State men’s soccer team (6-1-0, 2-0-0) defeated Evansville, 2-1, under the lights.

“We’ve talked as a team about striving for excellence both in terms of getting results and in terms of playing the way we want to play and playing well, and we’re super pleased about the three points,” said head coach designate Michael Seabolt.

The Bears began their offensive attack early in the match, when senior forward Aadne Bruseth  netted a low ball past the Evansville goalkeeper off an assist from Adrian Barosen to put MSU on the board at the 8-minute mark. Twenty minutes later, MSU struck again as Jack Denton recorded his second goal of the season when his header found the left side of the net with help from Kian Yari.

As time wound down in the first half, the Purple Aces answered with a goal of their own, sneaking a shot past goalkeeper Michael Creek to bring the game back within one in the 42nd minute. The teams went into the locker room with MSU holding the 2-1 lead.

The second half was a defensive battle by both teams. MSU fired off seven shots during the second 45-minute period, while Evansville took two of its own. None found the back of the net, though, and the Bears ultimately held the advantage in shots, 18-4, and shots on goal 8-2 at the end of the match.

“We had stretches where we played very well. We’re still looking to put together our best game, and we’ll do that as the season progresses and we keep improving,” said Seabolt.

MSU continues its season at home on Wednesday, Sept. 29 at 5 p.m. when it hosts conference foe Drake, who is sitting just behind the Bears in MVC standings. All home matches at Allison South Stadium this season are free admission for all fans.