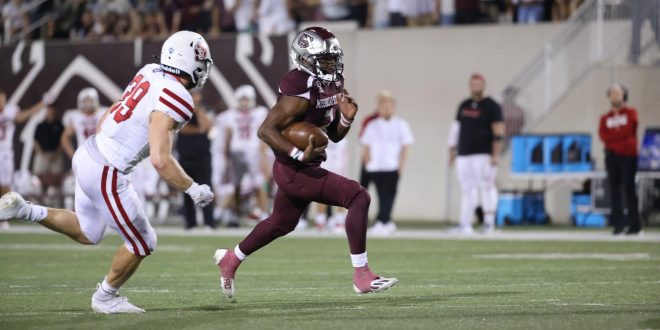 SPRINGFIELD – Missouri State’s Jason Shelley passed for two touchdowns and ran for a couple more to help lead the Bears (2-1) to a thrilling 31-23 come-from-behind win over visiting South Dakota here Saturday in the conference opener for both squads.

The No. 18-ranked Bears racked up 439 yards of total offense with Shelley passing for 281 and adding a game-high 62 ground yards. It was the team’s largest offensive output since Oct. 27, 2018 vs. Southern Illinois.

The victory was not an easy one for coach Bobby Petrino’s team. The Bears fell behind 14-0 out of the gates after a pair of costly turnovers and eventually trailed 23-14 at the game’s midway point. But the second half belonged to the home side with Missouri State’s defense surrendering just three first downs and 136 total yards while Shelley and company did their thing on the offensive side in the final 30 minutes.

Shelley engineered two scoring drives in MSU’s first three second-half possessions to erase the Coyotes lead. The first came on a 42-yard field goal by Jose Pizano after a nine-play, 49-yard march, and the go-ahead score was a dramatic, 74-yard drive that gave the Bears a 24-23 lead after a 3-yard TD pass from Shelley to Kevon Latulas.

With the game in the balance late in the fourth quarter, a Missouri State interception by Ferrin Manuleleua, who also recovered a fumble in the first half, gave the Bears the ball at the South Dakota 27 with just over six minutes to go and a narrow one-point lead. Shelley wasted no time completing a 13-yard pass to Isaac Smith to the 14 on the first play before Tobias Little carried the ball to the 12. After an incompletion on the next Bears play, Shelley scrambled around the right side and found paydirt to give the Bears a 31-23 lead with just 4:42 remaining.

South Dakota (2-2) would not go down without a fight, however, stretching out a 65-yard catch-and-run from Carson Camp to Carter Bell on the game’s next play. A touchdown-saving tackle by Titus Wall brought Bell down at the MSU 9-yard line, then a 5-yard pickup to Travis Theis on the next play gave USD a second-and-goal from the 4. But three consecutive incompletions turned the ball over on downs to the Bears who took over on their own 6 with just over three minutes remaining in their second goal-line stand of the night.

The game was not quite over, despite a pair of runs by Little to the 25 that gave the Bears a first down there. Two plays later, a 41-yard completion to Smith looked like it would end the game, but the Coyotes forced a fumble at the end of the play and took over at the Bears 48 with 80 seconds showing on the game clock.

But just as it did throughout the second half, the Bears defense rose to the occasion. A sack by Zack Sanders and an interception by Montrae Braswell in the end zone sealed the win and pushed the Bears into the ranks of the MVFC’s four unbeaten teams – along with South Dakota State, Western Illinois and Southern Illinois – on opening weekend.

Wall led the MSU defense with 10 total stops, while Kevin Ellis brought down a career-high 9 ball carriers and notched a career-high 3.0 sacks.

On the offensive side, Tyrone Scott and Ron Tiavaasue both broke personal bests with Scott tallying 7 catches for 111 yards and a touchdown, and Tiavaasue grabbing 3 passes for 52 yards. Joining Shelley as MSU’s top rusher was Little with 14 carries for 62 yards. Shelley was 19-for-29 through the air.

It was his third straight 200-yard passing effort with no picks.

The Bears improved to 18-19 all-time in MVFC openers with their third straight victory to open league play. It also extended Missouri State’s win streak at Plaster Stadium to four straight, the club’s longest such surge since 2010.

Pizano’s third-quarter field goal was his seventh-straight make, which is tied for the fifth-best field goal streak in program history.

The Bears dug themselves an early 14-0 deficit out of the gates on the heels of a pair of early mishaps, the first on a muffed punt by Hunter Wood inside the 10-yard line after the first series of the game forced USD into a punt. The Coyotes punched it in on the very next play on a 5-yard TD run by Kody Case.

On the ensuing drive, Shelley was sacked on a third-and-13 play, and when the ball sprung free, the Coyotes jumped on it at the MSU 21. On the next play, Carson Camp hit Case for a 21-yard TD strike to give the visitors a 14-0 lead just five-and-a-half minutes into the game.

But Missouri State righted the train on its second drive with Shelley carrying four times on the seven-play scoring march, including a 26-yard touchdown run to cap it. The Bears never faced a third down on the 75-yard excursion, which took 3 minutes, 50 seconds to make it a 14-7 contest at the 5:38 mark of the opening quarter.

The second quarter included a monumental goal-line stand for the Bears with South Dakota knocking on the door at the Bears 6 after Camp scrambled for 16 yards to set up a first and goal. Camp carried to the one on first down, but the Bears slammed the door, forcing the Coyotes into three straight zero-gain carries from scrimmage to turn the ball over on downs at the one.

Missouri State carried the momentum into South Dakota territory on its next possession, getting as far as the Coyotes 41 before punting it back. But the shift in energy continued for the Bears moments later as they jumped on a USD fumble and turned it into points. Shelley’s 46-yard touchdown strike to Scott on the first play after the USD turnover tied the game up, 14-14 with 1:37 left in the second quarter.

But somehow the visitors racked up nine more points before the intermission, first on a 99-yard kickoff return by Wesley Elador and later on a 27-yard field goal by Mason Lorber as time expired to make it a 23-14 contest at the half.

Camp was 12-for-29 for 231 yards for USD, with Bell racking up 102 yards on 3 receptions. Nate Thomas carried 4 times for 60 yards to lead the Coyotes ground attack.

The Bears will start a two-game road swing next week at Illinois State (1 p.m.) when the Valley rivals square off in Normal.

The next home game for the Bears will be a homecoming date with Indiana State on Oct. 16 at Plaster Stadium. Tickets available now at MissouriStateBears.com or at the Old Missouri Bank Box Office, (417) 836-7678, during regular box office hours.