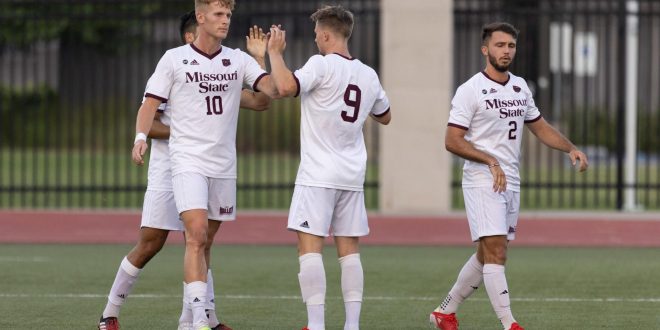 Match Details
The Bears (5-1-0, 1-0-0) host Evansville (0-5-1, 0-0-1) on Saturday at 6 p.m. For all the latest information and in-game updates on the Missouri State men’s soccer team, visit MissouriStateBears.com or follow @MSUBearsMSoccer on Twitter and Instagram.

Quick Kicks
•  Missouri State is currently atop of the Missouri Valley Conference standings after starting conference play with a win. The Bears’ overall record this season is 5-1-0 while Drake is close behind with a 4-1-0 record and is also undefeated in conference play.
•  After four weeks of regular season play, MSU is right on the edge of the United Soccer Coaches Top-25 poll, receiving 65 votes at No. 26. The Bears remained at No. 14 for the second-straight week in the College Soccer News’ Top-30 poll and are sitting in 16th place in this week’s Top Drawer Soccer Top-25.
•  Three Bears rank in the top-10 in the Missouri Valley Conference for assists. Midfielder Kian Yari sits in the number one spot tallying four assists through six games (.667). Josh Dolling is in the number three spot with three assists in six games for an average of .500.  Aadne Bruseth is the third Bear in the top-10 in the MVC with two assists on the season.
•  After four full weeks of the regular season play, Jon Koka is tied for the top spot for goals scored in the conference. The forward from Bilboa, Spain, has had a red hot start to the season, scoring four goals in as many games, good for an average of .667.
•  The Bears’ win over SUI Edwardsville on Sunday night was MSU’s ninth straight win in a MVC season opener. The streak dates back to 2012.
•  In the MVC, Missouri State holds the highest averages for goals scored, shots on goal and assists given. Over six games, the Bears have netted 12 goals (2.000), put 35 shots on goal out of 76 taken (5.83) and doled out 14 assists (2.333).
•  The Bears hold the conference’s top single-game efforts for assists and shots taken, while being tied for the most goals scored, and points earned in a single game. All four conference highs were achieved on Aug. 29, when the Bears hosted Rockhurst, and beat the Hawks 4-0. MSU tallied six assists, 20 shots, and four goals and points during the shutout win.

Bears Happenings
•  Seniors Josh Dolling and Kyle Hiebert garnered several preseason honors at the start of the 2021 season. For the second-straight year, both Dolling and Hiebert were named Preseason All-Americans by College Soccer News, with Hiebert earning first-team honors and Dolling landing on the second team. Days later, the Bears’ veterans were announced as part of the field of 44 players named to the MAC Hermann Watch list, the most prestigious award that an NCAA Division I soccer player can receive. The pair also made the list in 2020-21, with Hiebert being named as one of the 15 semifinalists. n
•  Missouri State swept the Missouri Valley Conference’s player of the week honors last week, with forward Jon Koka and defender Kyle Hiebert winning Player of the Week and Defensive Player of the Week, respectively, on Sept. 14. The last time the Bears secured both honors was on March 30, 2021, when Aadne Bruseth and Adrian Barosen swept the conference recognition.

Take a Look Ahead
Following Saturday night’s matchup with the Purple Aces, the Bears will host Drake on Wednesday, Sept. 29 at 5 p.m. before heading back on the road to take on Bradley at the beginning of October.