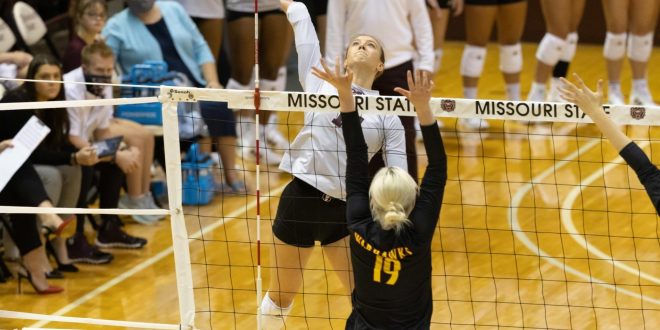 Amelia Flynn led the Bears (9-4, 0-1) with 17 kills, Brooklyn Cink had a double-double with a 13 kills (on .379 hitting) and 13 digs, and Manuela Ibarguen scooped a season-high 17 digs to lead the defensive effort. Azyah Green led the Bears with four blocks, and Kennedee Anderson served two of MSU’s four aces.

After finishing an opening-set loss with just eight kills and six errors, the Bears’ offense erupted with 17 kills on .519 hitting in a dominant second frame, getting five kills each from Cink and Flynn and four more from Maddy Bushnell.

The third set was tied 11 times with five lead changes, and the Bears built a 19-14 advantage before Loyola charged back, gaining set point at 24-23. Kills by Ibarguen and Green spoiled a pair of set points for the Ramblers, who then landed their 18th and 19th kills of the period for the victory.

The Bears were poised to force a fifth set up 24-19 in the fourth when Loyola made a remarkable comeback, scoring the final seven points to stun the home team.

Missouri State hosts Valparaiso (10-2, 1-0) at 5 p.m. Saturday. Fans who show a ticket to the Bears’ Saturday night football game will be admitted free to the match.