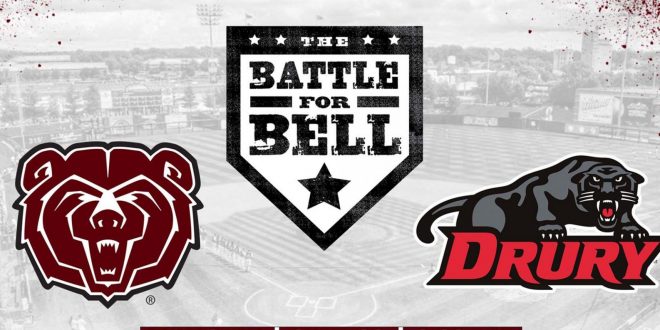 SPRINGFIELD, Mo.— Drury and Missouri State will tangle in baseball tonight in the ‘Battle for Bell’ exhibition game, 6:30 pm at Hammons Field. Admission is $5 (children under 13 are free) with all seating general admission. A portion of the proceeds will go to the CoxHealth ALS Clinic, which provides coordinated care and support to ALS patients in the region.

The annual preseason honors the late Howard Bell and the ongoing quest to find a cure for Amyotrophic Lateral Sclerosis (ALS). This year’s game is the fifth such exhibition between the two programs.

Howard Bell, who lost his battle with ALS in 2013, shared close connections with both the Missouri State and Drury baseball programs. A three-year letterman for the Bears under current head coach Keith Guttin, Bell capped his collegiate career with a standout 1986 campaign in which he was honored as Mid-Continent Conference Player of the Year after hitting .396 and helping MSU to a then-school-record 47 victories and its third straight AMCU Tournament title.

The Springfield product also spent more than a decade working on the baseball staff at Glendale High School and was an assistant under Mark Stratton, who would later become the Panthers’ first head baseball coach in 2005. Bell took over the Falcons program as head coach when Stratton arrived at Drury.

Gates open at 5:30 p.m., and general admission seating will allow for social distancing at the ballpark.

Thursday’s game will be broadcast live on JOCK 96.9 FM/99.9 FM/1060 AM. Springfield Hall of Fame broadcaster Ned Reynolds will be on the play-by-play along with Drury broadcaster Ed Beach.

Additionally, a raffle will be held, allowing fans to enter two drawings for an assortment of school apparel from each university.