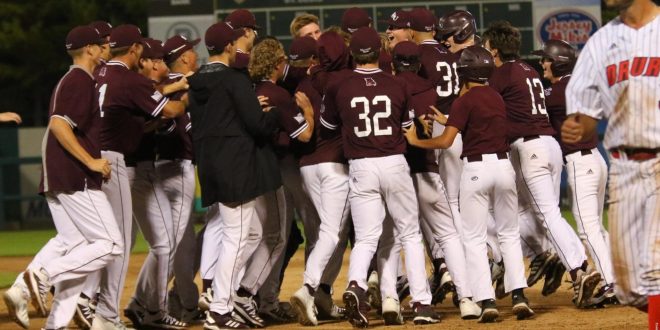 Bears Walk Off Panthers in Battle for Bell

SPRINGFIELD – In a game that means more to the community than the cross-town rivalry between Missouri State and Drury, it was the Bears who captured a dramatic victory here Thursday, 5-4, on a walk-off, ninth-inning single by Jaden Rolffs in the annual Battle for Bell exhibition.

For the fifth time in nine years, the Bears and Panthers joined forces on the diamond to honor former Bear Howard Bell and continue their collective quest to help find a cure for ALS – commonly known as Lou Gehrig’s disease – with the nine-inning exhibition. The Bears claimed their fifth win over Drury in as many contests since the inception of the series in 2012.

Rolffs’ single to center plated pinch runner Walker Jenkins who ran for Mason Greer. Greer stroked a two-out triple past a diving Sawyer Smith in right field and into the corner to set up the game-winning hit moments later.

After trailing 4-2 after six, The Panthers clawed their way back into the contest with single tallies in the seventh and eighth innings to tie the game, 4-4. A wild pitch scored Smith in the seventh after he entered the game for Jackson Berney who doubled to right to start the inning. Another leadoff double in the eighth set up the tying run for Drury. Carson Chaver’s double to left center eventually turned into a tying tally on a squeeze bunt by Brent Schaffitzel two batters later.

The Bears managed just one base runner in the final three innings until Greer’s two-out triple in the ninth gave Missouri State the spark it needed.

Drake Baldwin led Missouri State’s offensive attack with a two-hit performance. Adam Link earned the win with 1.1 innings of work out of the bullpen, allowing a lone single in the ninth and facing six batters.

Drury out-hit MSU, 11-9, with Jackson Dierenfeldt and Schaffitzel each accounting for two hits. Nate Boyle, the fifth Drury pitcher in the game, suffered the loss after retiring the first two hitters he faced in the final frame.

Missouri State, which never trailed, scored the first run of the game on a solo homer by newcomer Will Duff in the bottom of the first. The hometown product and Vanderbilt transfer slammed a 1-1 pitch over the fence in left center to give the Bears an early 1-0 advantage.

The Panthers tied things up in the top of the third after Kaden Helsel led off the frame with a triple to center. Dierenfeldt then plated Helsel two batters later on an infield grounder.

The Bears responded with a two-run rally in the third on an RBI single by Cam Cratic and run-scoring double off the bat of Baldwin to make it 3-1.

Drury’s clean-up hitter Nikki Calabro made it a 3-2 contest with a solo homer in the top of the fourth, but Missouri State responded yet again two innings later on a moon-shot home run by Dakota Katowski to left field.

The Bears used six pitchers in the game with starter Jared Viertel striking out four in 2.0 innings of work, and the staff collecting 10 strikeouts on the memorable night at Hammons Field.

A three-year letterwinner for the Bears under current head coach Keith Guttin, Bell capped his collegiate career with a standout 1986 campaign in which he was honored as Mid-Continent Conference Player of the Year after hitting .396 and helping MSU to a then-school-record 47 victories and its third straight AMCU Tournament title. The Springfield product also spent more than a decade working on the baseball staff at Glendale High School, before taking over as head coach of the Falcons in 2005.

The Bears and Panthers send their collective appreciation to the fans in attendance for their support of the Bell Family and the game.