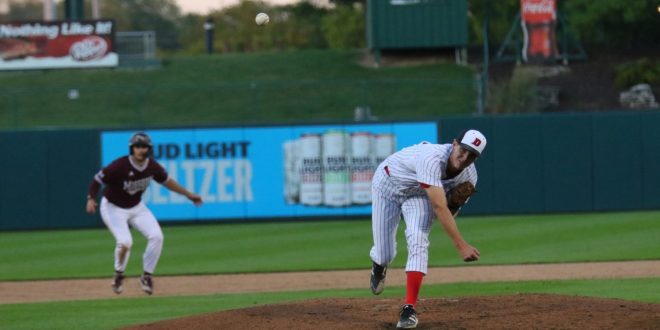 SPRINGFIELD, Mo.— Missouri State scored a run with two out in the bottom of the ninth to edge Drury 5-4 in the Battle for Bell exhibition game at Hammons Field on Thursday night.

The annual fall exhibition game drew an estimated crowd of more than 1,500, with a portion of the ticket proceeds going to the CoxHeath ALS Clinic honoring the late Howard Bell, the former baseball coach at Glendale High School and Missouri State standout.

The Panthers kept the game close throughout. Trailing 4-2 in the seventh, Drury pulled within one when Jackson Berney doubled, advanced to third on a fly ball, then scored on a wild pitch. The Panthers knotted the score at 4-4 an inning later as Brant Schaffitzel’s bunt drove in Carson Shaver from third base.

Missouri State escaped a top of the ninth that saw Drury put two runners on base, then won the contest in the bottom half of the frame. Mason Greer lined a triple to right field with the bases empty and two out, and Jared Rolfs’ single scored pinch- runner Walker Jenkins to end the contest.

“I’m very happy with the night, and that we were able to raise a lot of money for the CoxHealth ALS Clinic; that was the most important thing,” said Drury head coach Scott Nasby. “But we made some good plays when we needed to and had some great energy from that.”

Jackson Dierenfieldt and Brant Schaffitzel both went 2 for 3 with a run batted in, and Nikko Calabro smacked a solo home run in the fourth inning.

The Bears got home runs from Vanderbilt transfer and Springfield native Will Duff, and a solo shot from clean-up hitter Dakota Kotowski.

“Our pitchers worked the strike zone and attacked hitters well – that’s something we’re going to preach all year,” said Nasby. “We got good performances from Dierenfeldt and Schaffitzel and that should carry over through the rest of the line-up.”