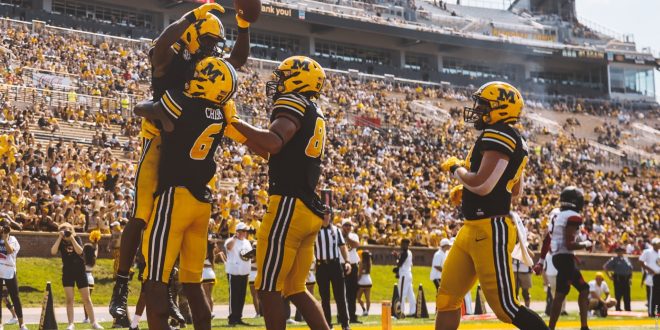 Big First Half Propels Tigers to 59-28 Win Over SEMO

COLUMBIA, Mo. – Tyler Badie scored three first-half touchdowns, two rushing and one receiving, and Connor Bazelak threw for 346 yards as Missouri got out to a 38-0 halftime lead over the SEMO Redhawks and cruised to a 59-21 victory.

Bazelak completed his first nine pass attempts and finished the half 21-of-30. He tossed touchdown passes of 11 yards to Badie, 46 yards to Boo Smith and 52 yards to Chance Luper. It was the most first-half passing yards by a Mizzou quarterback since Drew Lock threw for 371 yards in the opening two quarters against Idaho in 2017. It was the fourth 300-yard passing game of Bazelak’s career and his first this season. He completed passes to 10 different receivers.

The Tigers gave the Redhawks a heavy dose of Badie on the game’s first possession. The senior gained 66 yards on a 73-yard drive that he wrapped up with a 49-yard TD run. Badie scored the next TD, too, hauling in a 11-yard pass from Bazelak. He scored Mizzou’s final TD of the half on a one-yard run. Badie finished his day with 9 carries for 81 yards and two receptions for 14 yards.

Missouri had 675 total yards (440 passing, 235 rushing) to SEMO’s 373, most of which the Redhawks gained against Mizzou reserves in the second half, including 238 on the ground.

Leading 38-0 at halftime, Bazelak handed the controls to redshirt freshman Brady Cook and true freshman Tyler Macon in the second half, and they produced points, too. Cook led the Tigers down the field after a pass interception by Kris Abrams-Draine and threw a three-yard TD pass to Elijah Young.

Macon came on for Missouri’s remaining possessions and made his first pass attempt as a Tiger a memorable one, hitting JJ Hester for a 65-yard touchdown. Mizzou’s final points came on a 55-yard run by RS running back Michael Cox.

Missouri only punted once and that was in the fourth quarter. The Redhawks didn’t cross into Missouri territory until their second possession of the third quarter. They got on the board on a TD run from running back Geno Hess, two TD runs by Shamenski Rucker, and another on a 75-yard burst up the middle by Q’Nairies Anderson.