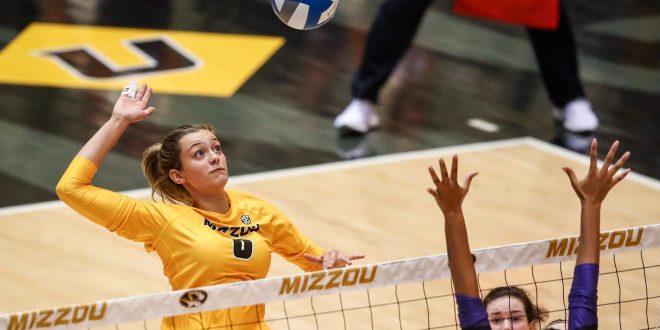 Freshman middle blocker Kayla Burbage produced a historic performance in the win over the Mean Green, flooring a career-high 14 kills while not committing a single error. Her .667 hitting percentage is the second-best in Mizzou five-set history while her 14 kills without an error are also the second-most in program history in a five-set match.

Mizzou was paced by a match-leading 13 kills from Dixon, who reached double figures for a sixth consecutive time. Freshman Jordan Iliff added five kills on the right side for Mizzou.

The Tigers, however, could not slow the Illini who hit .368 in the match. Kennedy Collins and Megan Cooney each produced double-digit kills with 13 and 10, respectively.

Burbage’s electric performance highlighted a come-from-behind win as the rookie punctuated the match with a solo block and a kill to cap her 14-kill, seven-block masterpiece. ­Dixon added 12 kills while Iliff and graduate Brynn Carlson chipped in another nine terminations each.

After North Texas hit .600 to run away 25-12 in the first set, Mizzou answered with a dominant set of its own. The Tigers took the second frame 25-15 behind a .321 hitting percentage while holding North Texas to just .081 in the set.

The third set saw the Tigers’ errors prove costly, as 11 hitting errors led to a 25-21 frame for the Mean Green. Mizzou produced more kills in the set, but also committed six more errors than North Texas, who regained the advantage at 2-1.

After falling behind early in the fourth set, Mizzou slowly chipped away to draw even at 17-17. Senior Anna D’Cruz provided a pivotal ace to put Mizzou in front 22-21 and the two sides traded points until the Tigers clinched the set at 26-24.

The fifth set turned on a 4-0 Mizzou run to take a 6-3 lead. After North Texas pulled within 6-5, setter Nicole Alford found the floor on two to spark what would be a 9-0 run to end the match. Freshman Kaylee Cox entered to serve and promptly fired an ace, one of two in her decisive service run.

“I’m so proud of this group of 15,” head coach Joshua Taylor said. “After a slow start, we found some rhythm and were incredibly tough when moments got tight. It was a true group effort and I’m looking forward to another tough match tomorrow.”

Mizzou faces host Illinois State in a 2 p.m. bout on Saturday afternoon. The match will stream on ESPN+.