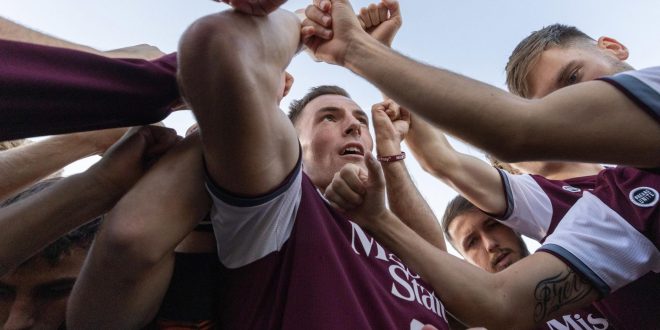 Match Details
The Bears (4-1-0) will travel to SIU Edwardsville (1-3-2) on Sunday at 6 p.m. For all the latest information and in-game updates on the Missouri State men’s soccer team, visit MissouriStateBears.com or follow @MSUBearsMSoccer on Twitter and Instagram.

Quick Kicks
• Missouri State swept the Missouri Valley Conference’s player of the week honors on Tuesday, with forward Jon Koka and defender Kyle Hiebert winning Player of the Week and Defensive Player of the Week, respectively, on Sept. 14. The last time the Bears secured both honors was on March 30, 2021, when Aadne Bruseth and Adrian Barosen swept the conference recognition. Koka and Hiebert claim the honor following Missouri State’s second half rally against a then-undefeated UCA team on Sept. 8.
• Four MSU players are in the top-10 in the MVC for assists. Kian Yari sits in the number one spot tallying an average of just under one assist in each of MSU’s games played (.800). Josh Dolling is in the number three spot with three assists in five games for an average of .600. The other two Bears in the top-10 are Aadne Bruseth and Javier Martin-Gil in the No. 9 and 10 spots, respectively, with two assists apiece in five and four games played. Last week, Yari, Dolling and Martin-Gil along with Drake’s Louis Yuill were tied for third place with an average of .667 and two assists each.
•Defender Kyle Hiebert is making a name for himself on the opposite side of the field. The senior from La Salle, Manitoba, Canada, has found the back of the net two times in four games. His average of .500 is tied for fourth best in the MVC. Hiebert is also one of only three defenders to make the conference’s top-10 in goals scored.
• Dating back to 2016, the Bears boast an overall record of 61-19-13. During that same time period, Missouri State went 34-7-4 in home contests. In the last three years, the Bears have won 34 games, only recording four losses and one tie from 2019-present. At home in those same three seasons, the Bears’ home record stands at 18-1-0.
• Koka has found himself in national rankings as well with his four goals this season. The junior forward is one of 11 players in the NCAA in the fifth spot for total goals. Eight of those players, including Koka, have played in four games.

Bears from Abroad
• The men’s soccer team features a diverse group of men with players coming from all over the world to play for MSU.  A total of 23 of the team’s 25 players are international, while two are from the United States.
• The largest number of Bears’ players are from England, with eight members of the roster coming to Springfield from the United Kingdom.
•  Over the years, a large number of players have come from thousands of miles to play for Missouri State. Since 2019, at least 75 percent of the Bears’ roster have been international players.

Take a Look Ahead
After starting Missouri Valley Conference play on the road, Missouri State will return home for a two-game home streak beginning with Evansville on Sept. 25. The match against the Purple Aces will kick off at 6 p.m. at Allison South Stadium. Admission is free at all home soccer matches this season.