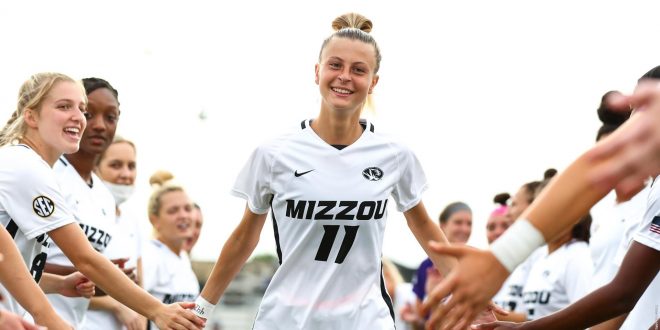 COLUMBIA, Mo. – Mizzou Soccer (4-3) will face the Gamecocks of South Carolina (5-2) to open SEC play on Thursday night at 6 p.m. CT in Mid-Missouri. The match will be broadcast on SEC Network with Mike Watts and Lori Lindsey on the call.

Mizzou finished the 2020 fall season with a fifth-place finish in the conference. Prior to the season, the SEC coaches picked the Tigers to finish 12th.

South Carolina has won the last seven meetings between the two programs after Missouri won the first three matchups. The Gamecocks dropped out of the rankings this week after sitting at 12th in the United Soccer Coaches poll last week.

Milena Fischer has been on a tear for Missouri. After being named SEC Freshman of the Week after her brace against Notre Dame, Fischer topped that feat on the road at BYU. She became the first Tiger with at least two goals and two assists in a match since 2001.

Senior Skye Kingsley has become another scoring threat for the Tigers. Kingsley has scored a goal in three of four matches. She has matched her career goal total from the previous season in those matches. The senior leads the Tigers with two game-winning goals on the year.

Freshman defender Ashlyn Mills leads the Tigers in minutes played, averaging over 90 per match. She has been on the field for 634 of 638 minutes during the 2021 season.