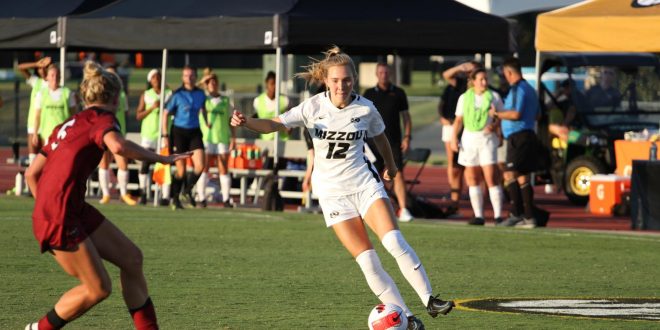 In the first half, the visitors controlled most of the possession, but neither side was able to make a difference on the board. The Gamecocks had a run of corners late in the half and a near own goal by Mizzou almost put Carolina ahead. However, the score was level at the break.

In the second half, the pace of the match increased rapidly. South Carolina was able to fire off 14 shots in the period to the Tigers’ five.

The Gamecocks got on the board in the 68th minute. A cross in the middle of the box was bounced around and a missed clearance led to a wide-open net for Catherine Barry, who shot it just underneath the bar into the top of the net to go on top.

The Tigers were quickly able to level the score. Milena Fischer drew the defense to the center of the field and played wide to the left for Blythe Beldner. The senior then cut back in and shot it into the right side of the goal for a 72nd minute equalizer.

Mizzou almost pulled ahead a few minutes later, but a Jenna Bartels shot was just saved by Hinz after a corner.

The two sides were level until late in the match when a dangerous cross into the box was not cleared and collected by Corinna Zullo, who fired it into the right side of the goal for the eventual winner.

Blythe Beldner scored her first goal of the season to tie the score midway through the second period. It was Beldner’s second-career goal.

Milena Fischer drew the defense to open Beldner up for the score. Fischer has been involved in the Tigers’ last five goals. Fischer played a career-high 90 minutes in the contest.

Milena Fischer has recorded 11 points (4 goals, 3 assists) over the past four matches.

The Tigers have fallen to South Carolina in eight-straight matchups after winning the first three.

Mizzou will hit the road to face off with Alabama on Thursday in Tuscaloosa.