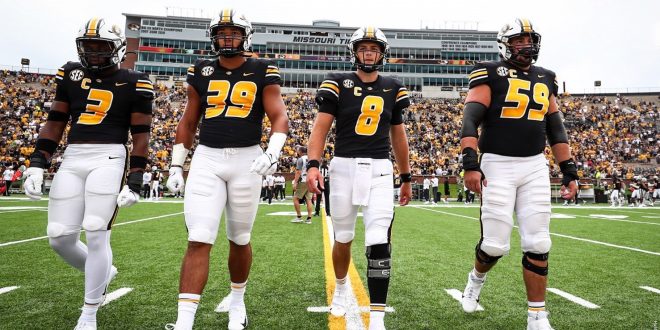 Mike Kelly, Howard Richards and Chris Gervino will have the call on the Tiger Radio Network.

The Tigers lead the series with the Redhawks, 4-0, with all four contests coming in Columbia. Mizzou’s last win was a 50-0 contest in 2019.

Kentucky got off to a fast start, overcame two first-half turnovers and a fierce comeback by the Missouri Tigers and went on to a 35-28 victory in the SEC opener for both teams. Connor Bazelak finished 34-of-51 for 294 yards, four scores and an interception. He also crossed the 3,000-yard career passing mark. Bazelak’s four touchdown passes matched his career high set last season against LSU. It also marked his fifth game with 250+ passing yards. Daniel Parker, Jr.’s first-quarter touchdown reception was his first since 2018, and the second of his career. He would later log his third career touchdown catch, and establish his first multi-touchdown game. Jaylon Carlies intercepted a pass for a second consecutive week. He is the first Tiger to record an interception in back-to-back games since Adam Sparks in 2017 against Vanderbilt and Arkansas. Isaiah McGuire sacked Will Levis in the first quarter, and improved his sack streak to three, dating back to last year’s season finale at Mississippi State.

No. 1 Sam Houston used a 24-point second quarter and scored the final 38 points of the game in a 52-14 win over Southeast Missouri at Bowers Stadium. The Redhawks twice tied the Bearkats in the first half. Aaron Alston made a bobbling catch along the near sideline and ran to the end zone on a 43-yard pass play to make it a 7-7 game with 6:33 remaining in the first quarter. The touchdown was Alston’s first of the season and fifth of his career. Keandre Booker later picked off Eric Schmid and ran 31 yards to the SHSU 2-yard line setting up the Redhawks next score, a one-yard touchdown run by Geno Hess. Hess, who led the FCS in rushing touchdowns last season, brought the contest to a 14-14 deadlock at the 11:01 mark of the second period. After that, the Bearkats responded with 38 unanswered points to put the game out of reach.

• Sophomore safety Jaylon Carlies has been a force at the back of Mizzou’s defense in the first two weeks of the 2021 campaign, creating three turnovers for the Tigers so far.

• Carlies recorded his first collegiate interception in the season opener against Central Michigan. He made it two-straight games with an INT by pulling in a deflected pass from Kentucky QB Will Levis in week two.

• The back-to-back INTs made Carlies the first Mizzou player to pick off a pass in consecutive games since Adam Sparks accomplished the feat against Vanderbilt and Arkansas in 2017.

• The safety also made one of the biggest plays of the game, forcing a UK fumble late in the first half which was recovered by the Tigers in the endzone. The play led to a Mizzou touchdown with four seconds to play in the half, pull the Black & Gold within seven at the break.

• Mizzou featured its tight ends heavily in the game at Kentucky, with Daniel Parker, Jr. and Niko Hea combining for eight catches.

• Parker was a favorite target in the red zone, hauling in a pair of touchdown receptions. It was Parker’s first touchdown catch since 2018 and his first multi-score game in his collegiate career.

• Hea made five grabs on the night, setting a career high for the junior. He totaled 37 yards on the five catches which also set a new career best.

• Through the first two games of the season, Mizzou’s tight ends have accounted for half of the Tigers’ touchdown receptions (3-of-6).

• Junior linebacker Devin Nicholson has produced eight tackles in each of the first two games to total 16 stops on the season.

• Nicholson has 3.5 tackles for loss which already matches his single-season career high from 2020.

• The junior also has a pair of sacks, one in each of the two games played, which already marks a single-season best for Nicholson.

• Nicholson forced his first fumble of the season at Kentucky (9/11).

• Redshirt sophomore Connor Bazelak picked up right where he left off in 2020, going 21-for-32 for 257 yards and two touchdowns against Central Michigan.

• The 257 yards marked the fourth time Bazelak has thrown for 250 or more yards in a game.

• Bazelak and the Tigers jumped out of the gate fast, hitting a 63-yard shot on the first play of the season. The pass was the second-longest of Bazelak’s career (69 yds – 2020 vs. LSU).

• At Kentucky, Bazelak matched his career high by slinging four touchdown passes. He finished the day 34-for-51 for 294 yards in the air. The 34 completions mark a career high for the Tiger QB.

• During the Kentucky game, Bazelak passed the 3,000 career passing yards mark in his 15th game played.