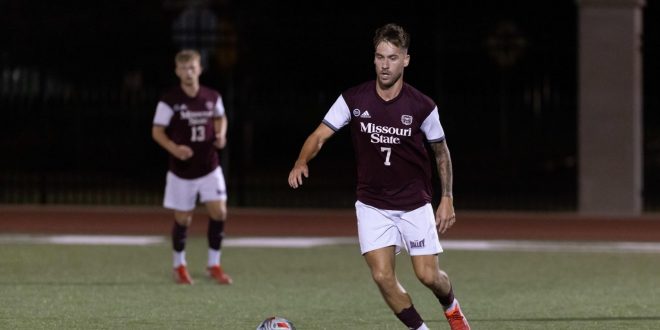 SPRINGFIELD – The Missouri State men’s soccer team (4-1) stayed unbeaten at home here Wednesday, as the Bears registered their second shutout of the year, 2-0, against Eastern Illinois.

MSU came out aggressively to start the match and was the one to strike first. In the 13th minute, forward Jesus Barea was fouled inside the box earning the team’s first penalty kick of the year. Fellow forward Nicolo Mulatero was the one to take the kick for MSU, and the leading scorer from 2020-21 lobbed a quick ball over the top of the goalkeeper’s head, to register his first goal of the season and to give the Bears the early 1-0 lead.

“All the players that started really brought a high level, and those coming into the game knew they had to raise it when they came in,” said assistant coach Phil Woods after the game. “We always need to make sure we stay humble and take care of the simple things. Do it right.”

With the slight upper hand, the Bears controlled the offensive pace throughout the game, holding the advantage in shots, 13-4, and shots on goal, 8-2. The Panthers didn’t go down easy, remaining within one score of Missouri State until newcomer Simon Pedersen put the game out of reach in the 79th minute, netting his first goal off assists from Josh Dolling and Aadne Bruseth.

“We need to work on closing the game earlier,” said Pedersen. “As long as we are only up one, the game is still open. [We need to] score the second goal earlier.”

Making only the second start of his career, sophomore goalkeeper Harry Townsend picked up a clean sheet, saving two shot attempts by the Panthers (0-5).

“Harry Townsend starting in the goal did a really good job,” said Woods. “[Michael] Creek obviously has been a real leader and helping him come along. There’s a great competition for spots,”

The win also marked the team’s 24th at Allison South Stadium since 2018 as the Bears improved to 24-2-1 in that span.

The Bears return to the road this weekend to kick off their Missouri Valley Conference schedule at SIU Edwardsville on Sunday, Sept. 25. The match kicks off at 5:30 p.m.