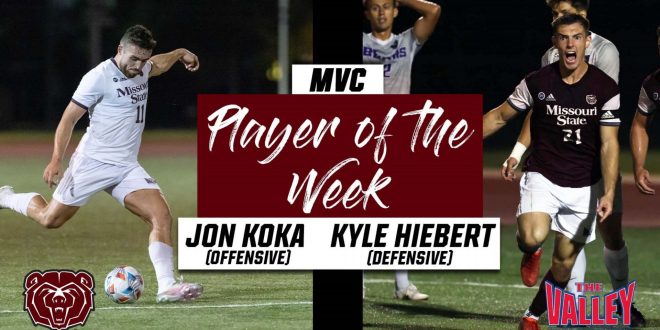 Koka is off to a red-hot start for the Bears this season, leading the team in shots (5), shots on goal (5) and goals (4). He’s also tied atop the conference in goals scored, with an average of one goal per game. In the last six games he’s played in, Koka has tallied six total goals for the Bears including two in a last-minute win over Maryland last season in the NCAA Tournament. Most recently, Koka netted the tying goal off a header in the Bears come-from-behind win over UCA last week.

Koka has found himself in the national rankings as well after the first three weeks of the regular season. The junior forward is one of 11 players in the NCAA in the fifth spot for total goals. Eight of those players, including Koka, have played in four games.

Hiebert has also been a difference maker on both sides of the field this season and earns the Defensive Player of the Week honor after finding the back of the net two times in four games. His average of .500 is tied for fourth best in the MVC. The MAC Hermann watch list member is also one of only three defenders to make the conference’s top-10 in goals scored after the first three weeks of the regular season. Last week in MSU’s victory over UCA, not only did Hiebert play a full 90 minutes of aggressive defense in the backfield, but he scored the game-winning goal in the 83rd minute to give the Bears the win.

Missouri State hosts Eastern Illinois on Wednesday, Sept. 15 in the team’s fourth home match of the season. The game will kick off at 7 p.m.