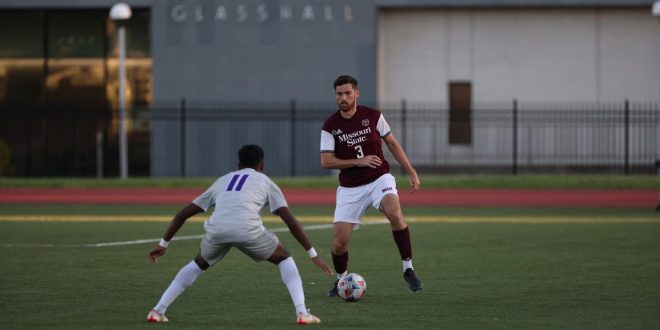 SPRINGFIELD – The Missouri State men’s soccer team will defend its home turf for a second-straight game when the Bears host Eastern Illinois on Wednesday, Sept. 15 at 7 p.m. (CT).

The Bears (3-1-0) will host Eastern Illinois University 0-4-0) on Wednesday at 7 p.m. For all the latest information and in-game updates on the Missouri State men’s soccer team, visit MissouriStateBears.com or follow @MSUBearsMSoccer on Twitter and Instagram.

• For the second-straight week, three Missouri State players are in the top-10 in the Missouri Valley Conference for assists. Kian Yari sits in the number one spot tallying an average of one assist in each of MSU’s games played. Josh Dolling and Javier Martin-Gil come in at number eight and nine on the list, respectively, with two assists apiece in four and three games played. Last week, the three Bears along with Drake’s Louis Yuill were tied for third place with an average of .667 and two assists each.

• In the MVC, Missouri State holds the highest averages for both goals scored, and assists given. The Bears have netted nine goals over four games (2.250), while dolling out 12 assists (3.000). MSU also has the MVC’s top single-game efforts for assists given and shots taken, while being tied for the most goals scored, and points earned in a single game. All four conference highs were achieved on Aug. 29, when the Bears hosted Rockhurst, and beat the Hawks 4-0. MSU tallied six assists, 20 shots, and four goals and points during the shutout win.

• After three full weeks of the regular season, Kian Yari has found himself among the top-players in the nation in assists. The midfielder from Manchester, England is tied for the No. 1 spot along with six other players in the NCAA. Yari has provided four assists in as many games, helping his team to nine total goals this season, good for a share of the 20th spot in the nation in team goals.

• Bears’ forward Jon Koka has been the offensive spark for MSU this season leading Missouri State in shots on goal (5) and goals (4). He’s also tied atop the conference in goals with four, boasting the best average in the MVC of one goal per game (1.000).  In the last six games he’s played in, Koka has tallied six total goals for the Bears including two in a come-behind win over Maryland last season in the NCAA Tournament. Against Belmont in the team’s first game of the 2021 season, Koka found the net for the first time of his junior campaign for the tiebreaking goal. Less than a minute later, he scored again to increase MSU’s lead and secure the win. Days later, Koka recorded his third goal in two games to solidify his best start as a Bear. Most recently, Koka scored the tying goal in the Bears come-from-behind win over Central Arkansas last week.

• Defender Kyle Hiebert is making a name for himself on the opposite side of the field. The senior from La Salle, Manitoba, Canada, has found the back of the net two times in four games. His average of .500 is tied for fourth best in the MVC. Hiebert is also one of only three defenders to make the conference’s top-10 in goals scored.

• Missouri State and Eastern Illinois’ history dates back many years, with the programs’ first meeting coming in 1989.

• Eastern Illinois comes into Wednesday night’s matchup with Missouri State, with a regular season record of 0-4, and one canceled game. Three of EIU’s losses have been decided by one goal, most recently falling to Bellarmine 1-2 on Sunday afternoon.

• The Panthers are coached by Ronnie Bouemboue in his second year at the helm of the program.

Take a Look Ahead

After hosting Central Arkansas and Eastern Illinois in back-to-back weeks, Missouri State hits the road to play its first conference game of the season at SIUE on Sunday, Sept. 19 at 5:30 p.m. CT.